It was a rough night. Actually it had been a rough several days. The flu had hit our household. The little one fell victim first and Big followed suit the next day. For several nights, my sleep had been anything but restful. In the midst of all the sickness, we are smack dab in the middle of transition.

We sold our dream home after only living in it for under three years and moved in with my parents while waiting to move back to Atlanta. Being the control freak that I am, a lack of control and transition make me very uncomfortable. In this season of misery, I mean transition, my husband had been gone more than he was home due to work. So in the middle of sickness, transition, and my husband being gone my sanity was in a ditch.

The night before, I slept a combined total of four hours due to Little coughing all night long. It felt like the days of nursing a newborn when I would catch moments of eye-shut wonder every 45 minutes between feedings. (Is there another way of saying that without sounding like a cow?)

By morning, however, it felt like night since it was pitch black outside. Big decided it was time to wake. I wake furious. I mean, seriously, when was the last time I slept — like really slept? Probably 2007.

I walked in their room and threatened that big girl in the most threatening whisper imaginable. I asked for 15 more minutes of quiet before we started our day. My socialite girl cannot handle quietness. She is a morning girl through and through. Two minutes later, I was about to blow. I stormed in the room on tip toes in order to not wake Little and yanked Big out of the bed. In the hallway I whisper-ally yelled, “I only asked for 15 minutes of quiet to not wake the baby!” I then shunned her downstairs. Alone. Being alone is her worst nightmare. My heart of hard and my words like ice.

As Little woke, I could hear my big girl crying inconsolably downstairs. I stood looking in the mirror at red, puffy eyes and realized that I was a bully. I was a bully to my own kid. I would never consider yelling at some random kid or my friends’ kids, yet I somehow deemed it perfectly acceptable to yell and demean my very own child.

I thought about myself. Do I respond well to yelling? Does it prompt me to choose correctly if someone yells at me? Do I gain more respect for whomever is yelling at me? The simple answer is no. Of course I don’t respond well to that, so why on earth would I think that my mini-me would respond well?

I knew something had to change. I walked downstairs and looked my daughter in the eyes. I told her I was sorry for yelling and she quickly forgave me.

I don’t write this post with answers or solutions. I can rack my brain for ideas to help calm the volcano in me: no more Facebook or Instagram or Twitter. No more TV dramas. Find a Pinterest board or blog to help. Read the Bible more. Eat chia seeds. I don’t know. I’m willing to try anything for a solution or fix, but part of life is accepting the messy, ugly reality of myself and asking God to work in me. Which for a someone who wants to do it perfectly right the first time, that is a tough task. I do know that the first step is just this: It’s realizing that I’m a bully. I’m a selfish human being who doesn’t know the first thing about parenting but can rely on Someone greater to cover me with grace.

I realize I’m not alone in my feelings. I never thought I was an angry, yelling-type person until I had kids. Kids have the ability to push you further than you ever imagined.

Maybe you feel like me. Maybe you feel completely inadequate in the job of raising kids. Maybe you find yourself failing more than you succeed. There is freedom and power in knowing you aren’t crazy alone. I am crazy with you.

One of the blogs I follow is called Hands Free Mama, and she wrote a post about this very thing. In her post, she spoke about realizing that she bullies herself which then causes her to bully her daughter. That is me. Maybe that’s you. I am my own worst critic. We as women tend to all be that way. I hold myself to an impossible standard. I offer no grace to myself. Her advice was to simply stop. Whenever the critical thought of herself enters her head she says, “Stop.” Whenever the critical correction of her child wants to spew forth, she says, “Stop.” Maybe a step forward today is as simple as saying, “Stop.”

So here I am. I’m Sarah and I’m a bully. But today, I say, “Stop.” I want to stop the bully in my head. I want to choose love. I want to accept grace.

Though Silent, He Speaks

The Art of Saying No

Sarah Bragg has worked with students in ministry for more than 15 years and previously worked in full-time ministry for 7 years. Her book titled titled Body. Beauty. Boys. The Truth About Girls and How We See Ourselves helps young women find their value in the One who matters. She is the Lead Editor for a student strategy and curriculum called XP3 Middle School for Orange at the reThink Group. She has a Masters of Arts in Biblical Studies from Dallas Theological Seminary. Sarah and her husband, Scott, and their daughters, Sinclair and Rory, reside in Marietta, Georgia. To listen to conversations about surviving life, check out her podcast Surviving Sarah on iTunes and to follow along with her life, check out www.SurvivingSarah.com.

On Being a Bully 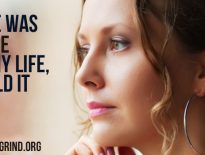 Articles Though Silent, He Speaks

Daily Life The Art of Saying No