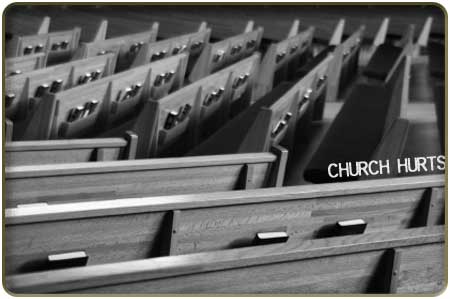 My friend Claudia asked for prayer for her dad. He left the church where her family had been members for over a decade. Now, she says, he seems to have a lack of focus, direction, and passion for the things of God.

Like many, people her dad trusted let him down and disappointed him. But not just any people, ones who confess to love God; ones for whom he had such high expectations because of their relationship with Jesus.

Hurts, wounds, and disillusionment can happen in churches and Christian settings. They occur in places where we unrealistically believe everyone will act in love, kindness, and forgiveness. These are places where we have high hopes, where we believe we can be vulnerable and safe.

I grew up as a pastor’s kid (P.K.) and then became a pastor’s wife. I’ve experienced deep hurt in churches. Many like me, who are either born into or choose for themselves to enter into full-time ministry, also experience the painful sting of well-intended church folks who have the ability to wound right to the core of who we are, like stabs in the heart. But wounds aren’t reserved solely for those in ministry. Some who have attended or participated in churches as active members have also been brutally surprised when it touches their lives.

But whether I’ve been wounded by other Christians isn’t the question. Rather, I need to ask myself how will I view the wounds when they happen?

What I tell others is that no one can attend church thinking they won’t ever be wounded or hurt because people run churches. And whether intentionally or unintentionally, people hurt people — even Christians.

Sadly, what I’ve observed over the years is that wounds from fellow Christians can really throw people, like Claudia’s dad, into disconnection and disbelief with God. Many feel blindsided, thinking these hurts are coming from God instead of imperfect people.

Sticks, Stones, and Words Do Hurt

Several years ago, while working for a well-known ministry, I was put in charge of responding to letters of criticism. I soon discovered that each letter revealed more about the one writing it, than what was being written about. Most senders were offended or angry at something the minister or a guest had said or done on the internationally televised program.

Early on, while going through the letters, I wondered and asked God how people who claimed to be true Christians could write such hateful things. It was then that the Lord reminded me of 2 Corinthians 5:18. Here Paul reinforces that God has given us the ministry of reconciliation. I was also reminded of Romans 2:4, where scripture speaks on the kindness of God leading to repentance.

What I began to understand was that many of the viewers writing in were feeling hurt and disillusioned about God, and in their pain, lashing out. They were having trouble separating what the minister or a guest had said, with who God is, and it was causing great conflict within them.

Instead of correcting or being defensive in my responses, I sensed that God had placed me in that position to gently help draw those who felt wounded back to Him; to help them regain their confidence in God and to encourage those who were feeling injured or disenchanted.

I began to see even more clearly what it means in Hebrews 12:2 about keeping my eyes fixed on Jesus and not on what other Christians may say or do in the name of God.

That’s the key I’ve found to loving the Church even when I’m hurt or disappointed by people who are in it. And I also know there are times when my actions or words have wounded and disappointed others, especially since much of my life has been lived within the church as a P.K. and a pastor’s wife.

One such instance occurred in a Christian graduate school forum where we were encouraged by the professor to dialogue and debate topics and issues. I was stunned a couple years after graduation to receive an email from a fellow student. My former classmate wrote to say she forgave me for one of my posts that had challenged one of her posts. She told how my response had hurt her and how she had just now been able to forgive me.

Truthfully, I didn’t even remember the instance. Here I had wounded someone and didn’t even know it. Not until then did I realize that hurt can be unintentional, and that I’d probably wounded many others without even knowing it.

Her email helped me see that not everyone who’s caused hurt in my past or may cause wounds in the future will even know what they’ve done or are doing. As I hope others will choose to forgive me in my weaknesses, I can choose to also extend forgiveness.

After all, God chose to forgive me while I was still clueless to my own sin.

By deciding to freely forgive without an apology or the shortcoming being acknowledged, I’m becoming more like Christ, my beautiful Savior.

I continue to pray for Claudia’s dad. Perhaps with time, he’ll return to the church he left, able to forgive those who have hurt and disappointed him. Perhaps, like me, he will find healing for his wounds. 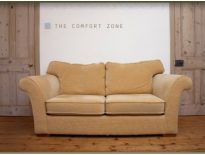 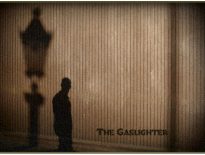