It’s been nearly seven years since I stood in the half bath of my house holding a pregnancy test reflecting a positive symbol.

The positive sign came as a surprise only because I assumed it would take us a long time to conceive. I would have never dreamed that we would conceive in the first month. My husband was at work in our basement so I quietly and calmly walked down the stairs and as he turned to me, tears filled my eyes as I uttered the words “I’m pregnant.” There was a little life inside me.

We found out it was a girl about fourteen weeks from that day and as we watched her twist, flip, and kick inside me, we were filled with excitement. As the days passed on, I thought about who I wanted her to be and also not be as she eventually became a young woman. There was so much that I didn’t want to be a struggle for her. There were characteristics I hoped wouldn’t be in her. Honestly, it was overwhelming because being a girl myself, I knew all the ways I struggled. Many times a feeling of hopelessness or loss covered me. In those moments, it was best for me to step back to think forward to the end in mind — not get caught up in all the in-between.

When I begin with the end in mind, I perceive what or who I want to be years from now. Having that goal (Type A personality here) helps me step back and then think about the steps to get there. When I think about the end, I think about what I will leave behind in my kids.

Legacy is something handed down or passed down to the next generation. We all have a legacy to leave whether you are married or not, have kids or not, or are young or old. What characteristics do you want to pass down? What legacy do you want to leave?

Here’s the deal: You cannot pass on anything that you do not already possess.

Raising kids is so much about modeling or becoming what you want them to be. You modeled for them how to eat, talk, and walk when they were mere babes and things haven’t changed for them now. You model how you want them to treat the opposite sex, alcohol, friendships, different people. The best thing you can do for your teenage child is to model who you want them to become. You lead them by modeling. Living and figuring out life is modeled by you so that when you are no longer here, your legacy is left within them.

Andy Stanley said, “Your doing will flow from who you are. The outer man will reflect the inner man. The inner man determines the legacy of the outer man.” The answer to the question of what you want them to become is found in answering the question, “What you do you want to become?” What you become will be your inheritance. Once you answer that, then determine what steps you can take to become that person. Maybe it is as simple as creating a list of qualities of someone you want to be. These words can form a perimeter around your behavior. If you want your children to be a certain way, then you need to begin taking steps towards becoming that.

You don’t have to overhaul your life. You simply can do one more thing than what you are already doing. If you want them to love God’s word, teach them one bible verse a month. If you want them to notice others in need, have them join you in preparing a lunch for the homeless man down the street.

Your legacy will be reflected in the lives you influence and the women who follow in your footsteps. These women will walk for a time in your shadow. Their lives will bear your signature. Anybody that knows me and my mother see not only a physical similarity, but see a reflection of her in me. What legacy will you leave? God has given you the ability to shape the future of those who follow you.

Reenergizing Daily Life: Four Ways to Thrive Through the Seasons of Life

Bending Low to Build Up: Speaking Life Into My Kids

Sarah Bragg has worked with students in ministry for more than 15 years and previously worked in full-time ministry for 7 years. Her book titled titled Body. Beauty. Boys. The Truth About Girls and How We See Ourselves helps young women find their value in the One who matters. She is the Lead Editor for a student strategy and curriculum called XP3 Middle School for Orange at the reThink Group. She has a Masters of Arts in Biblical Studies from Dallas Theological Seminary. Sarah and her husband, Scott, and their daughters, Sinclair and Rory, reside in Marietta, Georgia. To listen to conversations about surviving life, check out her podcast Surviving Sarah on iTunes and to follow along with her life, check out www.SurvivingSarah.com.

The End In Mind 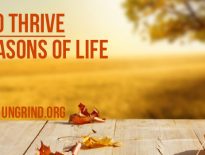 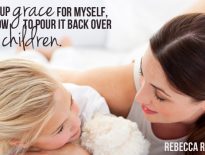 Articles Bending Low to Build Up: Speaking Life Into My Kid…