Two autumns ago, our world unraveled. My husband’s mother was diagnosed with pancreatic cancer and died. Our youngest son took a helmet to the neck in a football game and spent the next four weeks convalescing. I ran over someone’s dog. Our neighbor fell off his porch, broke his neck, and died. We left our church due to an intractable conflict and we brought bed bugs home from a hotel. It was the most difficult season of our adult lives.

Obviously, when we flipped the calendar from October to November, it wasn’t as if everything suddenly turned around. Sizable checks were written to the bed bug sniffing beagle and the man who baked our house to 140 degrees. We had a bereaved neighbor and family members to support and new jobs to be found. Our emotions swirled and eddied, swiftly heading for one precipitous drop after another.

On the way to leaving our eldest at college — and just before all of the calamity hit — we visited Niagara Falls. Normally, I find water soothing and comforting but not there; the speed and the sheer force of the water as it plunged down those 160 feet terrified me. Niagara Falls is symbolic of how utterly out of control life can be. It was a prophetic pit stop though we did not know it at the time.

Perhaps part of why I had such a negative visceral reaction to Niagara Falls is that I like to be in control. When I was a young child, I discovered that controlling my body and my emotions (and others whenever possible) diminished my fears and insecurities. For example, classmates teased me relentlessly because of my cavernous dimples. It didn’t take me long to conclude, “If people tease me when I smile me and I don’t like how it feels to be teased, I’ll stop smiling.” This and other such choices worked flawlessly but resulted in a lifestyle that necessitated relentlessly monitoring and controlling every thought and facial expression for the explicit purpose of avoiding humiliation, shame, or someone’s anger.

And then Jesus showed up and messed with my modus operandi. Passages such as, “If you cling to your life, you will lose it, and if you let your life go, you will save it” (Luke 17:33), made it increasingly obvious that I had to face my fear of being out of control and learn to trust God as well as those unpredictable human beings.

Embedded habits are difficult to extricate. Though I desired to follow the ways of Jesus, I continued to assume that successful relationships were contingent upon my not disappointing or angering anyone. Fifteen years into this faith venture, God began to disassemble my spin machine by helping me to understand that I was actually manipulating my friends and family by only allowing them to see me from a favorable vantage point.

I didn’t willingly sign up this graduate level lesson. It happened during a time when we had three sons under the age of six and my husband worked three jobs. I was tired, angry, lonely, and increasingly unhappy. While praying (venting, more likely) one morning, I sensed God asking me a question: “What would it look like for you to let go?” I remember actually gasping and then a second later, sobbing uncontrollably.

Letting go was what I most wanted. I wanted to stop being perfect. To stop getting it right. To stop being the one who solved everyone’s problems and fixed everything that broke. I wanted the freedom to fall apart in public, even to have smudgy black mascara under my eyes and not worry about how others perceived me. But in order for that to happen, I had to stop trying to control everything and allow myself to go over the metaphorical falls.

Despite the fact that I have successfully plummeted (successful meaning I did not die) more than once, I occasionally turn and frantically swim in the opposite direction of the cascade. Striving for perfection comes more naturally than living vulnerably. But sometimes — like the autumn from hell — I have no choice; the current is simply too powerful and I am too weak. In those moments and seasons when I can’t grab a low hanging branch to stop the inevitable, I grab hold of Scripture:

So if you are suffering in a manner that pleases God, keep on doing what is right, and trust your lives to the God who created you, for He will never fail you. (1 Peter 4:19)

Now, rather than fighting to prevent myself from falling, I fight to believe these words, because someday, I’m convinced that I might actually enjoy the ride.

Dorothy Littell Greco works as a photographer, writer, and speaker. Her passion is helping others find their way through this sometimes confusing world. She and her husband have three sons and one daughter-in-law. You can find more of Dorothy’s work on her website or by following her on Twitter (@dorothygreco) or Facebook. 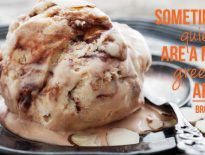 Articles For the Ice Cream Days 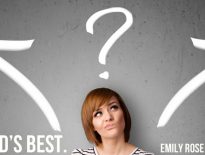