If I were to make a list of things I hate, driving would be very near the top. Just after diet soda and Elf on the Shelf.

Driving has always scared me. I didn’t get my license until I was 20, and I only did then because Andy said he wouldn’t marry me until I could drive. For some reason, being responsible for the lives of others while trying to maneuver a giant flammable machine just never excited me.

But the main reason I don’t like driving is even sillier: I get lost. A lot. To places I’ve been many times. Absolutely no sense of direction. It’s not that I don’t try, really. I rarely leave home without turn-by-turn instructions from Andy. But I still manage to somehow choose the wrong way. A lot.

For example, there was the time I attempted to bring McDonald’s to Andy for lunch, but couldn’t find his office (where I’d been many times). I drove around and around, with my then-small children calling from the backseat, “Are we almost there, Mama?” I lied that I thought so, and passed back fries by the handful to keep them quiet.

Once I went looking for a house for sale, and ended up on a dead-end dirt road in the Angeles National Forest. When I tried making a 27-point turn to get back to civilization, I “high-centered” across the low-shouldered street and got stuck.

But my best story of lostness happened 11 years ago, when I took my friend to Ventura for a beach day — only I couldn’t find the beach. I could smell the water, I could see the gulls flying overhead, but I could not find the entire Pacific Ocean to save my life.

My kids have a name for what to do when I get us lost: “Mom’s Famous U-Turns.” “Mom, do you know where we are? Just do one of your famous U-turns.”

(It’s nice to be famous for something.)

I suppose choosing the wrong way is harmless enough when it comes to driving. It’s an annoying inconvenience, but little else. However, when it comes to our spiritual journeys, wrong choices have much greater — even eternal — consequences. 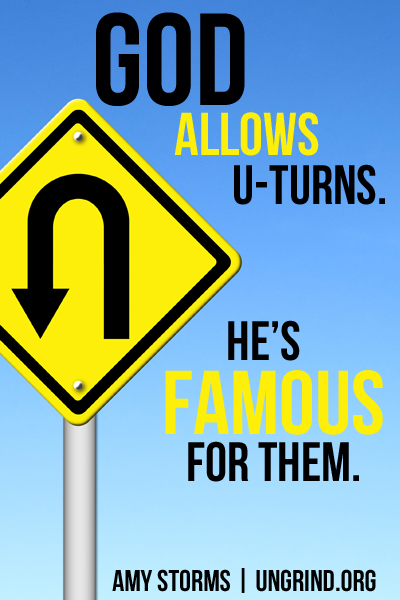 Lately I feel as though I’m standing at a sort of spiritual crossroads — as though I’ve come to a giant fork in life’s road and I’m choosing which direction to take. One path will leave things much the way they are: manageable. Little will be required of me if I choose this direction. After all, I already attend church, tithe, and obey the rules (usually). I’ll be free to continue life as normal: to spend my money as I please, to say whatever pops into my head, to lose my temper or whine, and to keep everything else under my control.

The other path — the one I feel drawn to, yet scared to start down — is radically different. I don’t know exactly where it leads, but I know it will require growth, and faith, and love. I will have to trust other people rather than protect myself from them. I’ll let myself love completely and be loved in return. I’ll give away my possessions generously, trusting God to provide enough for me in return, instead of selfishly being consumed with money. I’ll make my thoughts “obedient to Christ” and my speech “helpful for building others up.” On this path, I will never be in control, yet I will experience a freedom like never before.

These two roads remind me of a passage in Mere Christianity by C.S. Lewis:

“… every time you make a choice you are turning the central part of you, the part of you that chooses, into something a little different from what it was before. And taking your life as a whole, with all your innumerable choices, all your life long you are slowly turning this central thing either into a heavenly creature or into a hellish creature: either into a creature that is in harmony with God, and with other creatures, and with itself, or else into one that is in a state of war and hatred with God, and with its fellow-creatures, and with itself. To be the one kind of creature is heaven: that is, it is joy and peace and knowledge and power. To be the other means madness, horror, idiocy, rage, impotence, and eternal loneliness. Each of us at each moment is progressing to the one state or the other.”

I want to make the right choice — to become the creature in harmony with God. The last time I felt at such a crossroads, Andy and I ended up moving across the country to California. (Where, incidentally, I had to do a lot more driving. God is funny that way.) I don’t know what God has in mind this time, but I want to be brave enough to take the harder, scarier path.

And unfortunately, I will most likely veer off in the wrong direction at times. I’ll get lost, as usual, and make many wrong choices along the way. But good news! God allows U-turns. He is famous for them.

7 Ways to Beat the Winter Blues 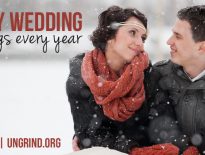