For me, it can be expressed through the rhythmic count of four numbers: 5-6-7-8.

Learning to point my short stubby toes in precise downward position began when I was a child. Some of my fondest memories include intertwining my long blonde hair with white ribbon and placing pink leotards on my young frame. Walking into the practice room with its chipped white walls was nothing short of inspirational.

As beats of music began to play, I carefully recalled counts in my mind. The feel of the cold hardwood on my feet was only temporary as I watched my awkward figure in the full length mirror begin to move. With each circular turn, my mouth quickly changed from its flat standard position to a contagious smile and that soon finished at a joyful expression.

Growing up in a home environment that consisted of many forms of abuse and all of its consequences, learning to move and leap freely proved to be more than a dancing skill. It was also a coping mechanism — a defense of sorts — against the chaotic world around me. Leotards and ballet shoes were my shields used to combat the trials I was forced to face.

Little did I know at the time, God was the strategist behind this method. In fact, there seems to be a biblical theme of using artistic expression — such as dance or praise — as a means of warfare.

In Joshua 6: 2, the Lord appears to Joshua and reveals His plan to conquer Jericho. It went against all of the Israelites former understanding and knowledge of warfare. They would have to let go of their man-made weapons and human strategies. Their uniforms would consist of trumpets and ram horns.

Freedom from their enemies required trust, patience, and perseverance.

Then the LORD said to Joshua, “See, I have delivered Jericho into your hands, along with its king and its fighting men. March around the city once with all the armed men. Do this for six days. Have seven priests carry trumpets of rams’ horns in front of the ark. On the seventh day, march around the city seven times, with the priests blowing the trumpets. When you hear them sound a long blast on the trumpets, have all the people give a loud shout; then the wall of the city will collapse and the people will go up, every man straight in.” (Joshua 6:2-5)

When reading this scripture, my imagination journeys back to the men on that day. Much like learning to point my toes in downward position, artistic expression as a means of warfare would be a skill they didn’t necessarily feel equipped to master.

As they daily prepared to march around the city, emotions must have ranged the spectrum from trepidation to assurance. Can we really believe Joshua heard from God? Will victory be ours?

Think about it. Not only were they not using accustomed weapons but they also had to march six days before they gave the loud shout. Regardless of their feelings, they chose to trust. In verse 20, we learn that they persevered and God gave them freedom from their enemies: “When the trumpets sounded, and the people gave a loud shout, the wall collapsed; so every man charged straight in, and they took the city.”

I can imagine the emotional shift as they witnessed the wall collapse. Fear must have been replaced with astonished looks and disbelieving expressions. Despite the odds of this situation, they were victorious! If they had focused on their enemies and the danger around them, doubt would have prevented them from their promised land. Instead, they chose to daily wake up, march around the city, and bravely face their enemies.

This biblical account not only speaks to God’s faithfulness but also His ability to creatively think outside of the box.

While serving in the inner city, I came upon warriors of a different kind. These warriors were young tween and teen girls whose enemies resembled drug abuse, physical/verbal abuse, and neglect. As I got to know these girls and assess their needs, I thought back not only to this biblical theme but to how God equipped me with dancing skills to help combat the trials in my young life. How would I make an impact in their lives?

The decision was easy. I would offer free dance classes for the girls.

As they bravely entered the practice room each day, warfare was taking place. Uncertainty and insecurity tried to overpower them. Because of this, we started each class with prayer and encouragement. Moving from prayer to stretching exercises, I could sense their walls of hostility collapsing as they let go of their defenses. Despite the fact that coordination was not a strong point for most of them, they diligently practiced new moves and crossed enemy lines.

During this time, I heard about a local competition taking place. The battle ground: a stage.

When I told the girls about the opportunity, they were fearful and reluctant. I reminded them of all they had accomplished and they decided to participate.

Months of preparation went by and there were many hard practices, emotional breakdowns, and hours of one-on-one encouragement. They were unaware of the abilities of their “enemies,” but felt the odds were surely against them. After all, these were girls from the inner city whose expertise was in street smarts not dance.

Competition day arrived. To show our unity, we were very specific in choosing our uniforms. We picked out red shirts representing power, black pants, and white shoes. Final preparations took place as the girls excitedly walked into the practice room. I sat with each of them and intertwined white ribbon in their hair just as I had done as a young dancer myself. The girls beamed as they took one final look at themselves in the full length mirror.

We arrived at the competition. Packed with spectators, there was not an empty seat in the room. Several individuals and teams flawlessly performed. Ready or not, the girls exchanged reassuring glances as their team name was heard over the loud microphone. Much like the warriors in the story of Jericho, the girls began to march in single file line onto the stage. They gave a loud shout of encouragement to one another in unison. The music was cued and the famous four count was heard.

The coldness of this world was temporarily fading away as they freely leaped and danced around the room. With each circular turn, their mouths quickly changed from flat standard position to a contagious smile that soon finished at a joyful expression.

After the performance, the judges deliberated. The girls held each other’s hands and said one final prayer. The serious-faced judges walked into the room with their results. Nerves were at an all time high as third place was called. Not us.

Anticipation was building as second place was called. Not us. Emotions ranged the spectrum from trepidation to assurance as they waited to hear the results. Whose name are they going to call? Could victory be ours?

The judges announced first place. As their team name was called, the girls jumped and squealed with excitement. Their facial expressions moved from fearful to astonished looks of disbelief. The girls who were often divided embraced each other so tightly that the love was felt by all. The few parents that attended thanked me for the difference they had seen in their daughter’s lives.

This competition was only preparation for the real battle they would be facing everyday. Their enemies: drug abuse, physical/verbal abuse, neglect, and all of its consequences.

Just as the warriors in the story of Jericho, God’s strategy required the girls to put down their accustomed weapons. This type of warfare would have to be fought with trust, patience, and perseverance. Despite the odds of the situation and the fear that was ever looming, they chose to trust. And for that reason, on this day, freedom for them, as it often is for me, was expressed through the rhythmic count of four numbers: 5-6-7-8.

[This article first appeared here at Ungrind on July 26, 2009. We’re republishing it because … well, we just love it that much. We hope you enjoy it too.]

Spread the love
Related Topics:Karin Hume
Up Next

Changed From the Inside Out 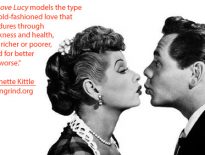 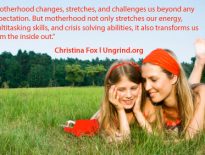 Articles Changed From the Inside Out