Nil per os. A Latin phrase meaning “nothing by mouth.”

For six days, an NPO sign has been on my two year old’s hospital room door. The sign will stay up for another two days. She is recovering from colorectal surgery, and her fragile system requires it. Dextrose, sodium chloride, and potassium flow from an IV bag to a PICC line to nourish and hydrate her tiny, 21-pound body.

It seems cruel and unusual punishment for a little person and her “show love with food” momma. With pleading eyes, she asks, “Loller? Mom, loller?” Her fingers make a W against her chin signing, “Water?” I melt inside, divert my eyes from her confused expression, and distract with toys.

God sometimes allows our tender spots to be punctured. My heart is most fragile for my kids, and as much as I want them to be off limits, they aren’t. When they are vulnerable, this momma bear stands at attention. Yet, slowly, I’m learning to release my grip and trust more.

For my first years of parenting, I lived contently with the illusion that I could protect my kids. That it was me, myself, and I who met needs. I planned their days, fed their bodies, and claimed full control of their little lives.

I let myself believe that I was their God.

Then, little by little, I’ve surrendered them. God pierced holes in my control bubble. First came surrenders to inevitable backyard scraps and playground hurt feelings. Then to Kindergarten classrooms and the deep end of the pool, watching from afar. We mommas must choose between hovering overhead to insulate them from bruises, bee stings, and bullies or releasing them to the adventure of fields, trees, swing sets, and new people.

The Lord has pressed into my control illusion, increasingly asking for wider submission. Next, a mission trip put an ocean between mother and children. I labored over leaving, and planned every activity, outfit, and meal they’d have. To board the plane, I had to sever more control. And when I returned? I found new independence, new appreciation for me, and new connection with grandparents.

Then came hurts that couldn’t be treated by Tylenol, infections not cured by amoxicillin. First was elbow surgery for one daughter, then spine and two bladder surgeries for another. Walking away utterly helpless from my child lying limp under anesthesia in operating rooms filled with computer screens, instruments, and doctors in sterile scrubs, left me defenseless.

Each experience challenges who I think God is to my kids.

I tell people I trust God, proclaim miracles He’s performed for us. But do I actually trust Him with my kids? Believe He’s a more powerful force in their lives than I am? In my head, yes. In my heart, I can’t honestly say yes. I am getting closer though.

Though He’s pushing my control buttons, He doesn’t watch me floundering from afar. When I yield authority of my kids, His presence is made known. Weakness is replaced by strength and unexplainable peace is given. My small faith grows.

Now again, I must surrender deeper still. I’m sitting with my NPO daughter listening for God’s voice. Truthfully, my heart cries out, questioning why this. My girl is being sustained from an outside source this week, fully beyond her parents. She’s suffering, and I’m stripped of control again. I offer only arms to rest in and silly faces as distraction. I blow bubbles, give sponge baths, push the IV on slow strolls, and take vitals on baby dolls.

Though I’m rendered helpless, a sustaining source flows. She’s plugged into an IV bag steadily streaming strength. I see the lesson being whisper-shouted into my heart. There is a sustaining Source we can release our children to. One stronger than IVs and ourselves. We parents tend to spin our wheels, worry, hover anxiously, and scramble for plans, trying to be the God of our children, completely underestimating His role.

I’m not savior to my kids. I don’t have it in me. I’m limited, weak, and often take on too much.

I am put in my place this week though. Reminded to release my grip on my child. She’s carried by a love beyond her mommy and daddy. Just as near as the IV. Just as simple. Just as powerful. Just enough for the moment. I can worry less. My role is band-aids, chocolate chip cookies, and hugs. Perhaps it is just that easy.

Jesus declared, “I am the bread of life. Whoever comes to me will never go hungry, and whoever believes in me will never be thirsty” (John 6:35).

Anxiety recedes, hope returns, and I can stop striving for strength. Instead of missing moments grasping for control, I can hug, blow bubbles, make silly faces, pray and trust.

The uncomfortable truth is that my children will face challenges that render me helpless. But my trust is bigger now.

Day six nil per os and her heart still beats. She still smiles and sleeps. So, when the NPO sign is removed, and broth and noodles are served, I want to hold onto the illustration. I’m not a stronger momma now, I am a decidedly weaker one.

6 Steps to Build a Beautiful Friendship

God of My Children 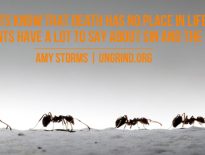 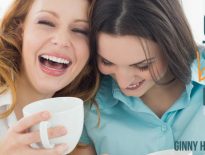