Breastplate of righteousness. Belt of truth. Helmet of salvation. Shield of faith. If you’ve been in the church a while, you’ve heard more than one call to “suit up” with Ephesians 6 armor. And if you’re like me, you’ve imagined yourself as a solitary soldier, dressed head to toe and ready for spiritual battle.

It wasn’t until much later that the obvious dawned on me: A lone soldier is a sitting duck. Soldiers don’t fight on their own — they advance together. They defend themselves together. In ancient Greece, a phalanx of soldiers would gather tightly, forming an unbroken wall of shields to face the enemy.

This is the picture we need for putting on the armor of God and fighting spiritual battles. We’re not out there alone; we’re fighting side by side. When my sister drops her shield of faith, I cover her with mine. And when mine gets too heavy, she can hold hers up for me.

I wrote last month about our need to be honest about our physical needs and the glorious glimpses of grace seen in helping and being helped. But if it’s hard to ask for help with practical needs, it feels downright impossible to reach out for support when we’re emotionally or spiritually low. We’re embarrassed that we’re still struggling with the same old sin; we’re frustrated by how stuck we feel, maybe even too cynical to believe a friend’s words could make any difference. Yet we need each other even more here, in our most tender places of vulnerability.

In my daily battles, I chronically overestimate my own strength, and pretty soon I’m waving the white flag, surrendering to anxiety, hopelessness, self-indulgence. It is so hard to reach out for help instead — to call or text or email a friend, to ask my husband for encouragement or prayer. But this is how God distributes His grace; this is how He develops humble, contrite hearts — the kind He delights in.

We need to be needy. It keeps us humble. In a world full of “You are enough! You are awesome!” messages, we can always use the reminder that we don’t have what it takes, that we are flawed and fallen beings dependent on a Savior. 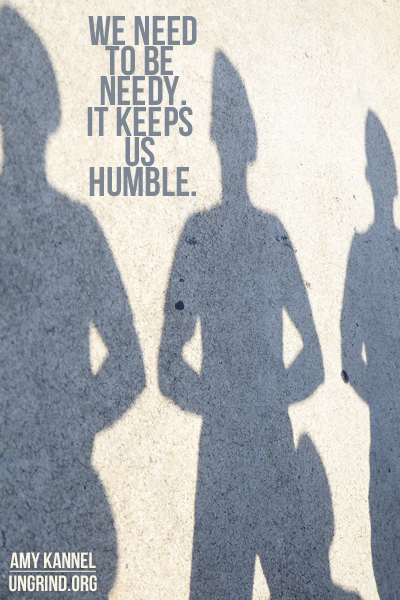 I’ve found that when I finally do reach out for help … it really helps! Something about hearing someone else speak truth to me makes it so much more powerful and effective than just telling myself. They may not be saying anything I don’t already know — but somehow, their having enough faith to say it helps dismantle my unbelief. I need people in my life to cut through the static of my sin and the noise of the world and speak life-giving words of truth and grace and hope.

What really amazes me about asking for help is the way it helps the helper. In God’s economy, nothing is wasted; so often those who give also receive abundantly more. One friend of mine has endured more trials in the last few years than I can fathom. She’s had to wrestle hard. But I have been so encouraged just to see her stay in the fight, however weakly she fights! At times, she has called me from the bottom of a pit — when she’s so angry and bitter she can’t see straight, when she despairs of life itself.

In those moments, I don’t want to offer hollow platitudes, and I don’t have wise words of advice. But I can pray with her. So I offer halting, feeble prayers, grasping for words to plead with the Lord and comfort my friend. She thanks me, but I’m the one who comes away feeling blessed. What a privilege to fight alongside my sister, to be a vessel of God’s grace to her! And seeing her confess weakness and persevere through trials challenges me to do the same.

On the other side, when I’m the needy one, I’ve seen how my need helps my husband grow. As I’ve battled discouragement and felt very “stuck,” I’ve tried to confess my struggles to him and humbly ask for his help. Part of me doesn’t want to burden him. But I’ve marveled at his growing ability to preach the gospel to me, to make connections between Scripture and life and speak the truth I need to combat Satan’s lies. And as I rely on my husband, he learns to rely on Jesus instead of on his own wisdom; he grows in his ability to point people to Christ.

Further, when the burden is shared, the joy is also multiplied. In the hardest, scariest times in my life, I’ve shared deeply honest prayer requests about my fears and hopes. Because I’ve reached out, I’ve received so much grace in the form of friends praying for me and encouraging me. And those friends could then rejoice more profoundly with me when I shared how God answered their prayers and showered me with His mercies.

James 4:6 tells us that God “gives grace to the humble.” I know this firsthand: as I have humbly shared my struggles, I have received much grace.

Pride prevents us from being vulnerable; we fear what others will think of us if we admit failure, confess weakness. It’s hard to trust people with the deepest parts of ourselves! But we must reject the lie that we are the only ones who struggle. We are not alone. When we refuse to expose our raw and wounded places, we’re robbing ourselves of the abundant healing grace God is waiting to pour out on us. And we’re robbing those around us of the opportunity to be vessels of that grace.

What Does It Mean to Be Authentic?

Grace for the Humble Who Fight Side by Side 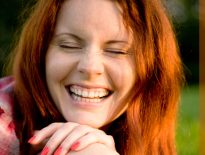 Articles What Does It Mean to Be Authentic? 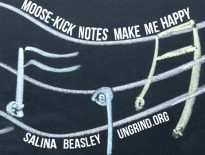