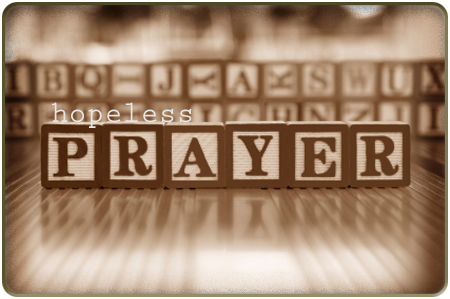 I don’t know about you, but when I come to God with a prayer request it often sounds a little something like this: “Dear Lord, today I pray for the health of my friend. Her prognosis sounds hopeless so I release her future into your hands, but I also pray for her healing.

Although there is nothing glaringly wrong with a prayer like that, the subtext of my words is utter hopelessness. I don’t believe that God will heal her so I subtly alter my wording to reflect my low expectations, not my true desires.

This type of prayer is not unlike a letter that a little girl once wrote to a missionary. She wrote to tell him that her Sunday school class had been praying for him. However, she had been told not to request a response to her letter because the missionaries were very busy. As a result of these instructions, the missionary received the following comical response: “Dear Mr. Missionary, we are praying for you. But we are not expecting an answer.”

This girl’s letter is an analogy for my prayer life. So often I pray for the healing of a loved one or the reconciliation of a broken marriage, while secretly believing it is too late. I think I already know what God is going to do so I pray out of duty, but I don’t expect a positive answer.

At least, that was how I used to pray. Until I read Acts 12.

To set the scene for this passage, Peter had been in prison awaiting an almost certain execution. Verse 5 tells us that his church was earnestly praying for him, but they probably felt completely hopeless. Their brother James had been executed just days before, so it was very likely that Peter would suffer the same fate.

Fortunately, God heard their prayers and He delivered Peter. In fact, the rescue was rather extraordinary! God sent an angel to wake Peter in the night and lead him out of the prison. With the angel’s help, Peter strolled past two different guards and walked right out the front gate. Peter himself could not believe what was happening! He thought it was all just a dream.

Eventually, Peter realized that he was not in a dream and that God had answered his prayers. He then triumphantly declared, “Now I know without a doubt that the Lord has sent his angel and rescued me from Herod’s clutches and from everything the Jewish people were hoping would happen.” Immediately, he ran to see his friends and tell them the good news.

However, the story did not end the way you might expect it to. When he arrived at the house there was no welcome party. At least not right away. Why? Because they were not expecting him.

Did you catch that? Peter returned to the home of his friends, who were in the very midst of praying for him (v. 12). They were praying for Peter, but they did not expect their prayers to be answered, as evidenced by their reaction of disbelief. The servant girl who answered the door ran to tell the others, “Peter is at the door!” but they thought she was mad. They accused her of being “out of her mind” (v. 15). Despite the fact that Peter’s friends had been engaged in fervent prayer for days, they were shocked when God actually answered their prayers!

But He did. And He does. Not only does God answer our prayers, but He can do so in the most miraculous, mind-blowing ways. I rarely see this in my own life because my prayer life is so faithless. I am like the man in James 1 who asks but does not believe. Scripture warns that such people “should not think he will receive anything from the Lord; he is a double-minded man, unstable in all he does.””

Acts 12 has therefore challenged me to test God in this. I have resisted the reflex to lower my expectations when a situation sounds hopeless. Instead, I have submitted my concerns to God in genuine trust and optimism. If God can send an angel to break Peter out of prison, then He can certainly handle my requests! So I now pray expectantly and with great hope, because I don’t want to be the kind of Christian who is shocked when God turns out to be who He says He is. I want to live each day as though He is. 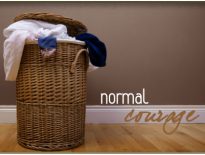 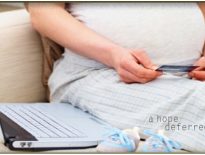