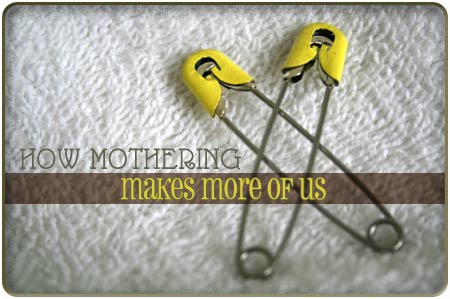 In the Boundless article "Motherhood on Trial," Megan Basham shared the stories of women who are voluntarily childless (as well those who had children but regret it). Some of these women equated child-rearing with personal and professional obliteration: They feared it would strain their marriages, destroy their careers, and compromise their autonomy. Others claimed that the reality of parenting was so horrifying that no one who knew what it was like would go ahead with it.

As I read the article, I had to admit that, yes, there is an element of obliteration in motherhood. In order to make space for a new life much of your old life has to go. During pregnancy, your body transforms in miraculous yet alarming ways. In turn, you revel at the quickening child within you, and grit your teeth as you part with your pre pregnancy jeans, your ability to sleep through the night, and your breakfast. In that first month, your baby may be smaller than a grain of rice, but she begins to make disproportionately large demands. Her presence reminds you that you’re going to have to rearrange your life in a big way. This is especially true during the pregnancy and the postpartum months, when growing and caring for the child leaves little energy for much else.

Becoming a mother is akin to being a grain of wheat thrust deep into the soil. There’s a sudden anonymity about your life: Much of your best work is now done behind closed doors. In tiny, concrete ways, like washing behind your baby’s ears and thinking up little ditties to make diaper changes fun, you participate in God’s love for your child. Time is no longer marked by the ticking clock, but by your baby’s needs.

To become mothers, many women drop out of the public eye, leaving careers or college so that they can give themselves to the work of growing a human being. They are pushed deep into the soil of motherhood, and like most seeds, they don’t look too remarkable in the eyes of the world. Nor do they always perceive their own growth. When I was pregnant, I feared that I was shutting the door on all sorts of unexplored possibilities. When I admitted this to a friend she said, "I think this child is going to be part of your growth."

When I was pregnant I just couldn’t believe her. I finally understood her words the night Anna was born, as I held her little burrito of a body and life opened to me in an infinitely fresh way.

In Gail Godwin’s novel Evensong, one of her characters defines a vocation as "a job that is always making more of you." This is the best way I can describe the work of caring for a child, for both the mother and the father. Putting aside your own desires (like a good night’s sleep and an undisturbed cup of morning coffee) to tend to another person is intense enough that if you don’t change—and become more than you were to begin with—you won’t survive.

But mothering is also compatible with lots of other ventures that can expand your sense of self. When I was a kid, my mom took me with her to deliver meals to homebound elderly folks. She also volunteered one night a week at a local hospital while my dad watched my brother and me. I still remember watching her head out in her crisp uniform and thinking, "My mom does something really important!"

Two young mothers in the building next door study for their Medical Board exams while their babies sleep. Another gives piano lessons from home. Yet another has a radio program on a local station and has started a small organization to upgrade the local public library. For me, having a child has provided the impetus I needed to begin to write seriously.

For generations, stay-at-home mothers have been contributing to society. Some of them, like the Proverbs 31 woman, make money doing this. She perceives that her merchandise is profitable. Her lamp does not go out at night (31:18). She, like so many other women around the world, plunges into work of her own after her kids nod off.

Mothers need a sense of purpose separate from their offspring, because children grow up and move on. Mothers who have been cultivating their own gardens have flowers that will continue to bloom in wild and unexpected ways in the years to come.

I said before that becoming a mother is something like sinking into deep soil. But what fertile soil it is! Infinite opportunities for growth are hidden in that soil. The grain of wheat in John 12:24 must fall into the earth to die so that it can bear fruit. So too, many women choose to surrender much of their former lives so that they can be fruitful.

When I was at seminary my mentor explained to me that there are seasons of our lives where we are called upon to surrender things we hold dear. This occurs in a profound way when we marry and leave our parents to cleave to our spouses. I was happy to take my husband’s name when I married because I felt that the symbolism made sense. I was leaving one identity behind in order to espouse a new one—by becoming husband and wife, he and I both had to change and become more flexible. Sharing a name helped cement our commitment to become one from two. For a married couple to thrive, each spouse has to surrender certain aspects of their pre-married existence. During the cleaving phase, some pieces of their single identities have to go. But the best parts of ourselves always come back in a fuller, richer form, like the rose bushes you cut back one year only so they can burst into color the next. This was equally true for us when we had our first child, and together, we surrendered some of the spontaneity and freedom we had as a childless couple, only to discover a deeper form of freedom.

I mentioned my mentor who spoke of surrender. He also described a hopeful pattern from his own life. "I have never surrendered anything that was really good that didn’t come back later on in a fuller and richer way," he said.

This is how it is, especially for mothers. We let go of our pre-baby identity only to find ourselves anew. Frederick Buechner wrote that we discover our vocation at the intersection of our own deep gladness and the world’s deep hunger. This is the place of the seed, the soil that grows a mother. This is the work that never stops making more of us, that begins to make even the impossible seem possible.

Jenny Schroedel is the author of Naming the Child: Stories of Infant Loss, released by Paraclete Press in May 2008. She lives in Kona, Hawaii, with her husband and two daughters. Visit her blog at http://justrest.blogspot.com.

Spread the love
Related Topics:Jenny Schroedel
Up Next

Jenny Schroedel is the author of Naming the Child: Hope-Filled Reflections on Miscarriage, Stillbirth, and Infant Death. She's a freelance writer living in Holualoa, Hawaii. She tends to take raw, aching experiences from her own life and try to find something that might be hopeful or helpful in them for herself and for others. Writing is exhilarating and exhausting in turns, and bring perspective to her primary job as the mother of Anna and Natalie and wife to John, an Eastern Orthodox mission priest. Visit her blog at http://jenschroedel.com. 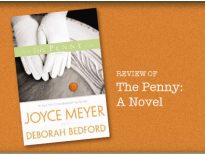 Articles Review of The Penny: A Novel 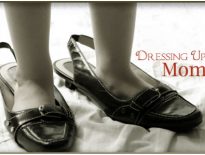