My phone dinged with a text from a friend with a link to a sermon. “Listen to it now!” she gushed. “It’s a game-changer.”

I don’t usually listen to sermons in the middle of the day, but I had just settled my toddler down for quiet time and was about to tackle the embarrassingly long list of to-do’s scratched on an assortment of post-its on my desk. I had some time, and I considered my options. Listen to the sermon? Get things done? Or drown in a vat of ice cream?

You see, the day had had a pretty awful start.

My oldest had thrown a tantrum because she could not find the matching stockings to go with the dress she just had to wear today. She lay on the stairs screaming. Everyone was late. The preschooler had a field trip scheduled for later in the day, and was so excited about it that he could do nothing else but sulk and suck his thumb because the three hours between now and field trip time were like dog years to him. And the toddler was doing a Houdini impersonation instead of getting dressed. As usual.

On top of this, I managed to somehow break something on my blog. My husband reminded me gently that one of our credit card bills was unpaid. I was running late for Bible study and I threw on a new maxi skirt from Target which I thought was both cute and forgiving. (Forgiving is my new favorite word for clothes. My jeans from last year are, by contrast, decidedly accusatory.) I grouched my way through the morning, and it was only when I found myself stating longingly at a white chocolate chip cookie that I realized that I don’t even like white chocolate, something else is going on here. A quick look at the calendar confirmed there was a reason for it all: a perfectly timed hormonally-induced Oscar-the-Grouch session.

I came home, settled the toddler, and my phone dinged with my friend’s text.

I opted to leave all the post-its abandoned and chose to listen to the sermon while diving into the mint Moose Tracks frozen goodness. I licked the last drops out of my bowl and lay back on my pillow, enthralled by the words of Revelation 5 brought to life by the preacher.

And then, I fell asleep.

My toddler woke me a half hour later, and I swam into consciousness with waves of guilt breaking over my head. Had I really just squandered that quiet time? I could have gotten things done! And instead I took an unplanned nap, didn’t even listen to something spiritually edifying, and I consumed 500 calories on top of it? “You deserve to have to wear forgiving skirts,” I chastised myself. “You are such a sloth.”

But then I was reminded of Jesus, my gentle Shepherd, who noticed that His disciples were exhausted and overwhelmed and said to them, “Come away with me. Let us go alone to a quiet place and rest for a while” (Mark 6:31). And so they withdrew. And they did super-spiritual things like eat. And talk. And nap.

I looked at my ice cream bowl and my rumpled pillow with fresh eyes: as gifts from my Shepherd on a day when I, too, felt harassed and helpless (Matthew 9:36). For the truth is that I am not the indentured slave of a task-master with endless post-its and to-do lists. I am a daughter. Someone beloved. A lamb in the care of a very kind Shepherd who knows that left to my own devices I will wander off and fall into the abyss of self-imposed expectations and accusations. He is a shepherd who knows I need to be led to quiet waters and green pastures.

And sometimes, those quiet waters are a 20-minute nap, and the green pastures comes in the form of mint Moose Tracks ice cream. They are gifts from His hand.

He restoreth my soul. 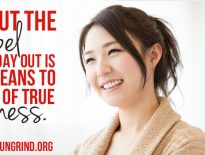 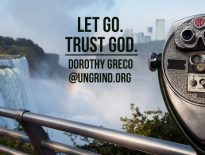 Articles Over the Falls