On April 15, 2013 during Boston’s annual marathon, two pressure cooker bombs exploded near the finish line. With that blast and the reports that the suspects were motivated by extremist Islamist beliefs, the tension and clash between the Muslim faith and Western culture is highlighted in our nation.

As Westerners, we can have a hard time understanding the faith and culture of Muslim people. We may even be tempted to view Muslims as our political, cultural, and spiritual enemies. However, author Kate McCord (a protective pseudonym) wants to give us a more intimate view of our Muslim neighbors.

McCord takes us on a personal journey in her book, In the Land of Blue Burqas, deep into the heart of the Muslim world: Afghanistan. There, she lived among Muslims, learning the Dari language, for five years as a project manager for a non-governmental aid organization. She worked alongside Muslims in her office and was welcomed into Muslim homes where she drank tea while seated on floor mats with her friends.

I was constantly amazed at the frankness of McCord’s conversations about her Christian faith with Afghans.

Being a single Christian woman living in Afghanistan, Muslims had no category to put her in. She stood out and was constantly questioned about her faith and why she wasn’t married with children. She had many discussions about American courting customs as well as marriage. In Afghanistan, marriages are arranged and sadly, McCord recalls that:

I’ve asked many Afghan men to tell me the story of the happiest day of their lives. Usually they tell me about the day they acquired their first wife. I’ve asked Afghan women the same question. Their answer never includes their wedding day. But when I asked women about the saddest day of their lives, their responses are similar. If the story doesn’t include bombs and guns and dead children, it almost always starts with “The day I married my husband.”

McCord shares with us the issues Afghan women face and sometimes — although not always — accept as a way of life: polygamous marriages, abuse, and lack of education. McCord points out that the problem between Afghan men and women won’t be solved with “money or government or even better men.” The problem runs deeper:

We read of the struggles of Afghan women and shudder. We pray for their deliverance and give money for programs to help them. There are laws designed to protect women in Afghanistan, but they’re not enforced. Afghans don’t accept those laws, regardless of the government’s insistence. Until men and women view one another as precious children of the God they worship, there will be little improvement. Until men learn to love their wives as Christ loves His church — to walk with them and talk with them, to sacrifice themselves for them — there cannot be health in that most fundamental human relationship.

Much of Afghanistan’s social problems (like domestic abuse) are spiritual problems at their root. McCord doesn’t shy away from having deep conversations about faith with her Muslim friends. And her conversations shed light on understanding the Muslim faith.

For instance, Muslim children learn to recite the Holy Quran through practice. However, McCord was surprised to discover that reciting and understanding are two different things. She shares this story about the day she asked a friend’s son to read for her:

One day I asked him to show me how he reads the Holy Quran. He pulled the book out, gently unwrapped it, kissed it, and then touched it to his forehead. He unfolded a wooden bookstand and placed the book carefully on top. Then he began reading. When he finished, he smiled with deep satisfaction, with the kind of pride one sees in a child’s face when he feels he has accomplished something wonderful.

I told him his reading was beautiful and remarked on how it must be a blessing to be able to do it. He beamed. Then I asked what the passage meant. Immediately his face darkened. He rebuked me. “The blessing is in reading the words and hearing the words read. You have heard these words read and therefore you have received sawab [reward].” His mother nodded her proud agreement. Apparently, I had missed the point.

In Afghanistan understanding the Holy Quran is the job of the local mullah, who has control over the theology and law. Those rules can change from village to village. Women do not go to the mosque, they must learn from their male family members what is required of them. A righteous life is determined by how well a person obeys the mullahs and the rules they set. The mullahs teach them how to live and what to obey.

Through many other conversations and stories, McCord investigates the Muslim world around her.

The narrative is organized by thematic chapters, as opposed to following a timeline of McCord’s five years living in Afghanistan. With chapters titled “Whose Example Do We Follow?” “How Do We Respond to Insult?” and “Who Protects Us from Temptation?” McCord recounts her attempt to learn about the Muslim faith through countless conversations. This narrative style does cause the book to be a bit disjointed and repetitive at times, but it is worth this small drawback.

McCord is always respectful in sharing the views of her Muslim friends. She doesn’t ignore their tough questions and asked her own.

She searched to understand her own faith better. And her love for her Afghan friends comes through the words on every page. “Despite the chasm that often separates us, we are precious individuals on our own journeys with God, trying to understand Him better and live lives that reflect who we know Him to be,” McCord reminds us. “In this journey we can encourage one another and often did…. God calls us to love our neighbors whether they’re Afghan or much like us.”

McCord challenges me to love those who are different from me. To not be timid to discuss our differences and to seek to understand another point of view, even if it’s radically different than my own, and to do so with respect and love.

What’s a Wife to Do?

The Journey of Singleness

In the Land of Blue Burqas: A Review 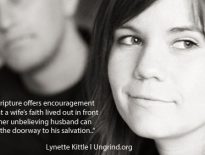 Articles What’s a Wife to Do? 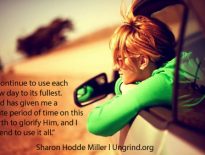 Articles The Journey of Singleness