Is there a mother among us who doesn’t intimately know the feeling of “mommy guilt”? Sometimes it comes at the hands of others: We feel like inferior mothers when we read certain articles or talk to certain people, their accusatory tone declaring that we are ruining our kids. Other times we heap it upon ourselves, comparing our worst moments to the polished and published lives of other moms and condemning ourselves.

I was at a gathering of moms recently where this topic came up, and the general consensus was that we all struggle with it, that it’s a part of being a woman. The solution offered? Something along the lines of “stop feeling guilty … realize that you have your own strengths … stop comparing yourself to others…” etc.

I have pretty big feelings about the ineffectiveness of “just stop it” as a response to heart struggles, so I asked myself: What can we do with this pervasive sense of guilt, this burden of shame that so often weighs us down?

The first step is to assess whether our guilt is legitimate. Am I feeling guilty because I am guilty? We tend to treat “guilt” as a dirty word, a negative emotion to be shed like a too-tight pair of shoes. But sometimes guilt is the only appropriate feeling. If we have broken God’s law — if we have sinned against Him and against our children — we should feel guilty, and trying to shrug off that guilt won’t make it disappear. The real solution to real guilt is to repent.

The good news is, if we really are guilty — if we’ve yelled at our children, if we’ve treated them with impatient contempt, if we’ve escaped online instead of loving and engaging with them — there’s a Savior for that. Guilt isn’t an end in and of itself; its purpose isn’t to make us feel miserable and hopeless. Instead of wallowing in our guilt, we can and must take it to Jesus. He is infinitely patient and gentle; He always loves sacrificially. He bore the punishment that our mom-failures deserve.

Beating ourselves up over our sin, while it seems like a good idea, is actually the height of arrogance. It says, “Jesus, your death on the cross isn’t enough to atone for my sin. I must add to your sacrifice my own misery and self-punishment, and then once I’ve suffered a while myself, I can return to you and regain good standing with you.” No. Jesus is most honored when we see our sin and run to Him — when we realize that nothing we do can add to His perfect redemption, that His death was completely sufficient to atone for every one of our sins.

That’s the response for real guilt. But not all our guilt is legitimate: Often, we labor under false guilt. We feel guilty because our Pinterest projects end up on a fail blog instead of re-pinned by admiring fans … because we aren’t juggling a successful career on the side … because we aren’t arranging enough extracurricular activities for our kids … because we aren’t doing X or Y or Z as much or as well as that other mom.

Surprisingly, the solution to false guilt is also to repent. Not because these kinds of failures are actually sinful; we aren’t offending God with our lack of sewing skills or our inferior cooking abilities or the fact that our home doesn’t look like a magazine spread. Rather, the offense here is secondary: it’s idolatry.

When we beat ourselves up over all the ways we don’t measure up to so-and-so, we’re making so-and-so our god. We’re looking to other people’s standards as law, holding our own standards up on an equal plane with Scripture’s commands, rather than looking to God alone as Lawgiver and Judge. We’re depending on others’ opinions for our identity and security, declaring that if only we had this person’s approval, then life would really be worth living.

Mamas, God is jealous for our hearts. He won’t sit by and let us pursue empty, soul-destroying idols like this. He loves us too much to let us chase the wind. He commands us to repent from our idolatry, to fear and worship Him alone.

The good news is, Jesus died for this kind of sin, too. Our idolatry should bring condemnation, but if we are hidden in Christ, trusting in Him, we have no condemnation — we are clothed in His righteousness, accepted and loved and welcomed. He invites us to come to Him and find rest for our weary souls. In Jesus, we can shake off the chain of false guilt; His yoke is easy and His burden is light.

Two kinds of mommy guilt … one Savior who is sufficient to set us free from them both. That’s real hope for a guilty mom. 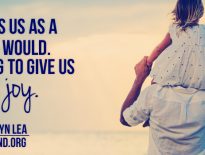 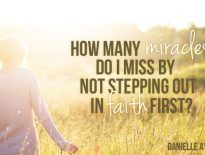