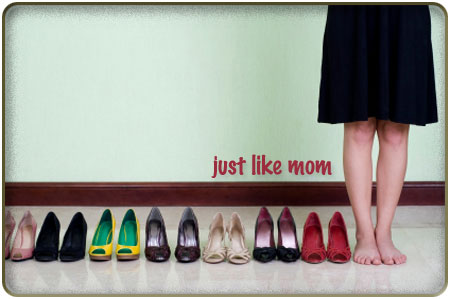 I don’t know when I discovered I had become my mother.

It may have occurred to me while I was mopping the kitchen tiles three at a time—always three—or pondering my unnatural abhorrence to crafts. It may have been when I cooked up a fiesta’s worth of tacos for my friends with all the little extras in bowls on the side. Or maybe it hit me when I was digging through my purse for a full minute, looking for my car keys, only to discover they were in my coat pocket.

There’s no doubt about it; I’ve become my mother.

She and I have always been similar—relational, analytical night owls. Even in high school I remember staying up until after midnight hashing out every detail of my adolescent life: boys, friend drama, God. We talked about everything.

In his play The Importance of Being Earnest, Oscar Wilde quipped, “All women become like their mothers. That is their tragedy. No man does. That’s his.” It’s funny because the quote captures a long running joke about mothers and daughters: Whether they want to or not, women become their mothers—or at least a lot like them.

Even ancient writers acknowledged this truth. “Everyone who quotes proverbs will quote this proverb about you: ‘Like mother, like daughter'” (Ezekiel 16:44). I only recently discovered that gem originated in Scripture.

And while genes may have something to do with it, becoming like your mother isn’t necessarily reliant on blood connection. You may remember the scene in Anne of Green Gables where John Blythe tells his former sweetheart Marilla Cuthbert, “The apple doesn’t fall far from the tree,” after her adopted daughter, Anne, slights his son, Gilbert.

It seems becoming your mother is inevitable. The thing is, I’m glad.

The Things Mothers Teach Us

My mom became a Christian in college. During a secular philosophy class she heard about the beliefs of Apostle Paul. They made sense to her and she began reading the New Testament. When she got to Matthew 7:13, she decided she wanted to enter through the narrow gate.

The summer my mom became a Christian, she took a job at the gift shop in Rocky Mountain National Park, where she met my dad. He played guitar for the college kids’ Bible study. Mom assumed he was a Christian and they started spending time together. Mom talked incessantly about her new faith.

A few weeks after they began hanging out, Dad said, “I accepted Christ into my life last night.”

Mom was shocked. She was also glad, and she married my father the following summer.

I had the distinct pleasure of being the daughter of first-generation Christians. Faith was never an old-hat to my parents. Instead it was something to be discovered and celebrated and held in a certain wonder.

Perhaps it was because of this that I witnessed a strong drive in my mom to know the Lord. As a kid I would come upstairs to find my mom sitting on the recliner in a fuzzy robe and slippers, reading her Bible. She unashamedly brought up Jesus with people who came to our house, such as the plumber and the guy who fixed our vacuum. And people liked to tell her their problems.

I’ve always wished I were a bolder evangelist. However, my mom’s example has given me compassion for people who don’t know God. People like to talk to me about their problems, too. And I hope I point them to God as faithfully as my mom does.

My mom is also a very persuasive person. She has a knack for encouraging people to do things they don’t want to do—for the benefit of others. She pulls the best out of people.

In my teen years, I had already absorbed this trait. I would seek out the kids with talents in my youth group and urge them to use their abilities in ministry. “Joe, you’re such a good guitar player. Would you be willing to head up the band for VBS?” Sometimes they resisted, but often they just needed to be asked. Today I utilize this skill when I work with authors and help them discover how and where to use their writing talents.

Another thing that has stuck with me is my mom’s compassion for the loner. In any group, she would see the outsider and draw him in. Whether it meant inviting the single mom to stop by for coffee any time or striking up a conversation with the person standing alone at church or inviting a single to Easter dinner, Mom demonstrated extraordinary sensitivity to the disconnected.

Psalm 68:6 says, “God sets the lonely in families,” and my mom embodied this as she invited the lonely into our family. I know that I notice lonely people because of my mom’s example. In fact, I believe it is what gave me the courage to take a teenage girl into my home several years ago.

No mother is perfect. And just as we learn wonderful, beautiful traits from our mothers, we also inherit some that are not so pretty. This is the “tragedy” that Wilde is referring to — a passing on of negative characteristics from mother to daughter.

I’m prone to answer questions (with great confidence) that I don’t actually know the answer to. I’ve been guilty of offering detailed advice without truly listening to the person I’m trying to help. And sometimes I make others feel guilty when things don’t go my way. In some of my weaknesses, I am also reminded that I am my mother’s daughter.

Recently, my youngest sister told me how I had hurt her with my words. “You think of what to say too quickly,” she said. “I feel stumped and embarrassed when we get into an argument.” Verbal agility and a sharp tongue are two things I’ve definitely inherited from my mom. The sin nature, however, I come upon all on my own. These “fleshly” traits must be worked on and given over to the Holy Spirit.

Some women have had better role models than others when it comes to moms. And I imagine this is where the joke, “Help, I’m becoming my mother!” comes from. Because of their position of (sometimes unwanted) authority in our lives, our moms can become targets of blame. But despite their shortcomings, moms teach us things — at the very least, how to be better mothers.

But perhaps one of their greatest legacies is the unique ways in which they show us God. In Isaiah, God describes Himself as a mother: “Can a mother forget the baby at her breast and have no compassion on the child she has borne? Though she may forget, I will not forget you!” (49:15). It is a mother who is the human example of God’s unflagging devotion to His people.

Her comfort reflects the tenderness of God. “As a mother comforts her child, so will I comfort you; and you will be comforted over Jerusalem” (66:13).

Because of these God-given attributes, mothers are worthy of honor. Proverbs 31:28 says, “Her children arise and call her blessed; her husband also, and he praises her.” Our mothers, more than most people in our lives, have shaped us into the women we have become.

And that is no tragedy. It’s not even a coincidence. In many ways I’ve become my mother—it’s true. But in my opinion, that’s a very good thing.

Spread the love
Related Topics:Suzanne Hadley Gosselin
Up Next

Growing Up Cameron: An Interview with Barbara Cameron 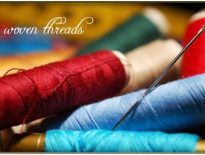 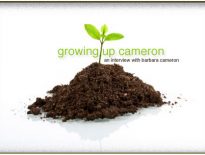 Articles Growing Up Cameron: An Interview with Barbara Came…