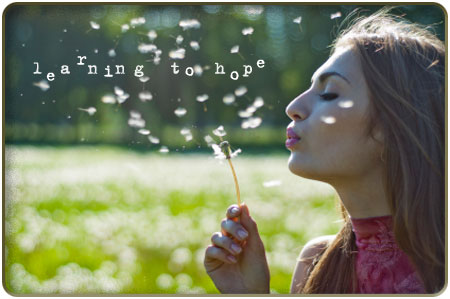 “Hope for the best, plan for the worst.” So says a philosophy I often live by.

It’s rather gloomy, really. It says, in essence, “Don’t get your hopes up too much, just in case things go wrong.”

And yet, lately, even this pessimistic, afraid-to-hope girl, is beginning to get a taste of the confident, courageous hope that can be mine in Christ.

Through the Book of Romans, and through the examples of my three kids, I am learning, slowly but surely, to hope.

Just before my daughter Molly’s ninth birthday, she wrote out her birthday wish list for us: a paint set, mystery books, and a Wii game. Then, at the end of the list, tacked on as a last request, she added, “iPhone. (Least likely.)” Does Molly want an iPhone? Absolutely. Did she get one, at age nine? No way. She knew it wasn’t an option, and she didn’t count on receiving a phone. And yet, she still added it to the list. It couldn’t hurt to ask, I suppose.

Unfortunately, I often pray with it. “Lord, will You provide this, please, even though I know it’s not very likely?” “I wish God would answer me … but He probably won’t.” I’m afraid to hope because of the potential letdowns. I guard against getting my hopes up, to protect against possible disappointment.

But what does Scripture say? Paul wrote to the believers in Rome, “Hope does not disappoint us, because God has poured out His love into our hearts by the Holy Spirit, whom He has given us.” Why should I hope when it’s probably out of reach? Because, in Christ, hope doesn’t disappoint. Because of His love, I can hope fully, without risk of disappointment. In Christ, “no way” becomes possible. Because of His love, “least likely” is promised.

In the Old Testament, Abraham knew this kind of hope. He lived by it. “Against all hope,” wrote Paul, “Abraham in hope believed” (Romans 4:18). He didn’t know where he was headed, but he went anyway. And fathering a child at his age? Definitely “least likely.” But, Abraham hoped against hope, “and so he became the father of many nations, just as it had been said to him.” Abraham was not disappointed.

How can I, the pessimist, grow such a confident hope? How can I move past my fear of disappointment? Paul offered two ways.

Again, Paul wrote in Romans, ” … we know that suffering produces perseverance; perseverance, character; and character, hope” (Romans 5:3-4). I watched my older daughter, Anne, grow hope through suffering in her ballet. Two Decembers ago, Anne was brokenhearted when she wasn’t chosen to dance the part of harlequin in her academy’s performance of The Nutcracker. In all her sadness, Anne persevered through the hurt.

A year later, Anne was finally selected for the role she’d wanted, and I smiled at her response. After I congratulated her, Anne said simply, “Thanks, but I feel bad for my other friends who wanted harlequin. I know how they feel.” It had been a year of suffering and perseverance, and now Anne had grown character. Now she had a compassion and grace that she couldn’t have had without the suffering. Anne grew from suffering to perseverance, from perseverance to character, and from character to hope.

In the Old Testament, Abraham persevered through suffering, too. He obeyed all the way up the mountain in Moriah to sacrifice Isaac, and his suffering led to hope. In the same way, if I embrace pain rather than protect my heart against it — if I persevere through hardship even when I don’t feel like it — my redeemer God will turn the “least likely” situation into good. The very pain I want to avoid can result in a lasting “hope that does not disappoint.”

Paul told the Romans a second way to grow hope: “For everything that was written in the past was written to teach us, so that through endurance and the encouragement of the Scriptures we might have hope” (Romans 15:4). Scripture, according to Paul, gives hope.

My son, Nathan, teaches me about the hope Scripture gives. At age 12, Nathan still battles a great deal of fear and nerves … all of which he inherited from me. Just this week, Nathan made himself sick with worry over attending church camp. I encouraged him with the best mom-pep talk I knew, but at the end of it all, only God and His word will walk with Nathan through the scary times. I can’t go to camp with my son, but God will. I armed Nathan with scriptural truths written out on index cards, knowing that the encouragement Nathan finds in God’s enduring Word will build his hope.

Scripture builds my hope, too. Not a dry, dutiful, reading of the Bible, but a relational, prayerful meditation of His living and active Word. When I read Scripture that way, I’m encouraged and filled with hope.

Paul offered the Romans a final teaching on hope: hope overflows. A new philosophy for a “least likely” like me: “May the God of hope fill you with all joy and peace as you trust in Him, so that you may overflow with hope by the power of the Holy Spirit” (Romans 15:13).

Hope doesn’t disappoint. It grows through suffering and Scripture, and it overflows by the Holy Spirit’s power as I trust in Him. The examples of my kids and Paul’s teaching in Romans are transforming this pessimistic, afraid-to-hope girl into a confident, courageous believer. I am learning to hope in the God of hope.

email
Related Topics:Amy Storms
Up Next 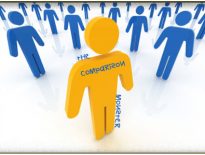 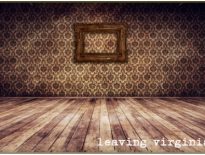