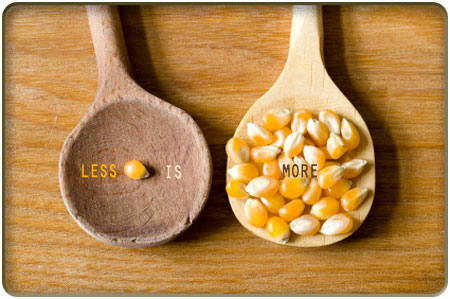 One crisp fall day, I sat outside my favorite Mexican restaurant with a good friend. As we munched on chips and salsa, she asked about my life as a newlywed.

“It’s been good!” I responded. “I’m probably the happiest I’ve ever been in my life!”

This got me thinking. While I do love being married, I suspect it isn’t the only factor that’s contributed to my newfound joy in life. I believe it’s also because right around the time of our wedding, I trimmed the fat — well, and almost everything else — from my schedule.

What’s ironic is that this decision is unlike me. Ever since high school, I’ve been over-committed. In the span of ten years, I’ve lead groups and activities nonstop. My natural tendency is to cram as much into my day as possible. For me, quantity equals effectiveness. The more I do, the more I get done.

My frenzied pace culminated last year, though. I ministered to students on a college campus, led two small groups in two different cities, and planned a wedding. I poured myself out without allowing any time to fill myself up, and I hit a wall. If my life were a line graph, it would have shown a steady decline of spiritual output in 2008-2009, which ultimately ended in a crash. My spiritual life mirrored the economy, and the quality of my endeavors started to suffer.

I decided it was time to prune.

My over-commitment was much like my husband’s insistence that sleep isn’t necessary before an exam. A seminary student, he has often pulled an all-nighter before a test. He believes that the more time he spends studying, the more he’ll know. In reality, research shows that a good night’s sleep is more effective than cramming. When the brain is too tired to process the information, then it’s essentially worthless.

This principle has played out in my spiritual life as well. If my body and mind are too tired to process and live out the faith I profess, then I’m not effective. What’s more, whenever I’m busy the first thing I usually cut is my quiet time. Martin Luther, on the other hand, once said that he needed to spend four hours in prayer each morning because he was so busy. He was exactly right. The more I do, the more I need God to sustain me. Not the other way around.

So I quit my job on campus, stepped down from leadership in my small groups, and stopped discipling younger women. I started from square one, determined to have very few commitments. This meant a less demanding job, a small group I didn’t have to lead, and most importantly, a very strict Sabbath.

It has been one the best decisions of my life. The spiritual winter I’ve experienced the last several years of my life is now turning to spring.

The transition from over-commitment to balance hasn’t been entirely easy. I’ve already been tempted to start adding in little commitments here and there. But after awhile, a few “yeses” can add up to a jam-packed schedule, so I’ve had to stay disciplined. I’ve done this in a few key ways.

Establish a Sabbath. First, I have tangible, measurable ways of caring for myself. The most important one is observing the Sabbath. My husband and I have picked one day each week on which we have no on-going commitments, not even church. This day is just for us and family, to be used however we want. Work is not allowed. We guard that day diligently, and it pays off. I also have a small group in which I can fellowship and be encouraged, and an accountability partner who does the same.

Learn to say “no.” And finally, I’ve stopped being afraid to say no. My time is valuable to me. I want to be a good steward of the days I’ve been given, and that means distinguishing the good things from the God things. Such a distinction requires prayer and discernment, and it also means I am not a slave to pleasing others. Whenever an opportunity presents itself, I examine whether it will prevent me from doing any of my top three priorities to the best of my ability. I also set aside a week or two to pray about whether or not God has called me to the opportunity, rather than make a decision in the moment. This means saying no to a lot of things and sometimes it’s easy to feel guilty about turning people down, but I am comforted by the knowledge that God’s Kingdom does not rise and fall on my shoulders. All that is needed is Him, a humbling reminder in the face of my own self-importance!

It feels good to have crawled out from under the pile of over-commitment. I’m not as stressed, the quality of everything I do has improved, and most importantly, I’m recovering my intimacy with God. When I take care of myself I am a better servant of God. I now consider rest to be an investment in His Kingdom.

Spread the love
Related Topics:Sharon Hodde Miller
Up Next 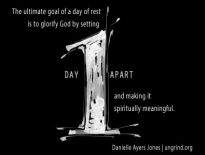 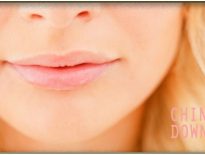