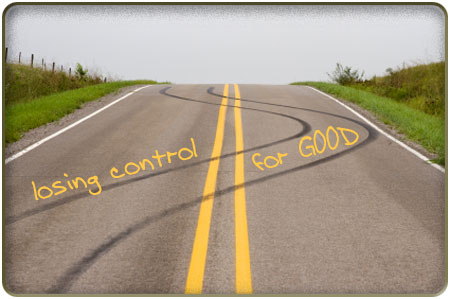 The first time my inner control freak became an issue in my marriage wasn’t long after my husband Mark and I said our "I do’s."

We sat in the airport way too early in the morning awaiting the plane to take us on our honeymoon. Before we left, my mother had told me to call when we got there. Granted, she would say that if we were going across town, but we were going to Mexico, so I completely understood.

Mark didn’t. He was used to being on his own and doing his own thing. As a result, a minor tiff and major pouting session (on my part) ensued.

"It’s common courtesy to let someone know you arrived safely," I argued. My inner control freak was not going to give in. I was determined to call.

I did phone when we got there, but in compromise, I didn’t give my parents the phone number.

What I didn’t realize in my small victory is that being a control freak is not a virtue. Wikipedia says:

In some cases, the control freak sees their constant intervention as beneficial or even necessary; this can be caused by feelings of superiority, believing that others are incapable of handling matters properly, or the fear that things will go wrong if they don’t attend to every detail.

I used to fall into the latter part of that explanation. I lived by the creed, "If you want something done right, then you have to do it yourself." I was good at micromanaging and terrible at delegating. In school I would do all the work on group projects, because I didn’t want to sacrifice my grade. I expected everyone around me to perform at my perfectionist level, with little or no grace for people who didn’t measure up.

But during the last few years I have had to learn some hard lessons about letting go of issues over which I have little or no control. My husband Mark wanted to move to another state. The birth of our daughter caused internal injuries requiring 18 months of surgery and disability (and I won’t even go into the "loss of control" I have felt raising her!). Mark started a new business last year and finances have been tight. And then there is the seemingly never-ending adoption process as I watch my daughters grow up without me.

About 18 months ago, I took part in a women’s study called "Changes That Heal,” based on the book of the same name by Dr. Henry Cloud. During that class, the primary thing I learned is I am not responsible for other people’s feelings or actions. That was a major breakthrough for me. The only person I can control is me.

Self-control is an important behavior in the Bible. I say behavior, because it is an act of one’s own will, like love. It’s an action. It’s a discipline. It’s a responsibility.

In an act of self-control we are to put on faith. Faith replaces fear and anxiety. What an "a-ha!" moment I recently had as I pondered Peter’s words in 1 Peter 5:7-9:

Cast all your anxiety on Him because He cares for you. Be self-controlled and alert. Your enemy the devil prowls around like a roaring lion looking for someone to devour. Resist him, standing firm in the faith, because you know that your brothers throughout the world are undergoing the same kind of sufferings.

In the battle to release my inner control freak, I’ve come to realize there are three things that are crucial to controlling my own attitudes and actions:

Stay in the Word. I gain strength and comfort through reading Scripture. I always am struck by the number of times God tells us to not fear. In Deuteronomy 31:8, God tells Joshua via Moses, "The LORD Himself goes before you and will be with you; He will never leave you nor forsake you. Do not be afraid; do not be discouraged." That is God’s word to me, as well.

Pray. I constantly have to ask God to increase my faith. I feel like the father in Matthew 9 who brought his demon-possessed son to Jesus. The Lord tells the man, "Everything is possible for him who believes." The man exclaims, "I do believe; help me overcome my unbelief!" (verse 24).

I recently read a passage in Streams in the Desert, which struck me to the core. It’s about a steamboat captain and George Mueller. Mueller said he had to be in Quebec on Saturday, and the Captain replied it was impossible due to the dense fog. Mueller suggested prayer, stating, "My eye is not on the dense fog but on the living God, who controls every circumstance in my life."

Mueller prayed a simple prayer. Then as the Captain started to pray, Mueller prevented him, stating, "First, you do not believe God will answer, and second I believe He has. Consequently, there is no need whatsoever for you to pray about it." They opened the Captain’s cabin door to find the fog had lifted. And Mueller was able to make his meeting.

I pray for faith like that. I pray for trust in the God who controls every circumstance in my life.

Surround myself with support. "Let us not give up meeting together, as some are in the habit of doing, but let us encourage one another" (Hebrews 10:25). I need to be around people who encourage me and have faith at work in their lives. Control issues and bad attitudes are contagious.

My friend Ann has incredible faith. She tells a story of not having anything to feed her family. After prayer, she found her freezer full. This same friend also has the spirit of discernment and will tell me when she senses fear rising up in me.

Admittedly, although I think I’ve made good strides, my "inner control freak" still surfaces occasionally. Looking back, it happens in situations when I have allowed myself to become anxious and fearful. I have to work on communicating to Mark when I feel threatened or neglected. I have to delegate my publicity duties within my Mothers of Preschoolers group. I need to let my daughter be a kid and not worry about the mess. I need to give the adoption process to the Lord. But with God’s help I’ll be able to remove focus from the dense fog of anxiety and fear in my life, and keep it on the living God who is in control.

And I’ll no longer be racking up points for battles won in my own strength.

Jodie Susanne Eyberg lives in Colorado Springs where she is wife to Mark and stay-at-home mom to Charis, awaiting the adoption of two girls from Haiti. You can read her journal of the adoption, family life, and other musings at A Heart in Two Worlds.

Spread the love
Related Topics:Jodie Eyberg
Up Next 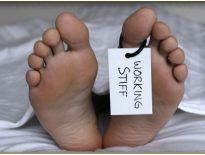 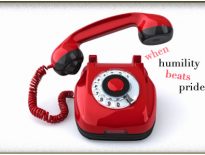