In my hands, I held the crumpled senior high school photo of a curly-haired boy leaning over his beloved keyboards. Using the picture as a guide, I scanned the college lecture hall until I found the person whose image I held between my fingers.

Abruptly, I plopped down next to the unsuspecting young man while introducing myself: “I’m Rhonda. I got your photo from your mom and dad who thought you might like to have a new friend since you just transferred to this school.”

I’m not gonna lie: awkwardness ensued … mostly because I had a super cute girlfriend with me, and the boy asked me to lunch adding, “And maybe your friend would like to come with us, too?”

(My husband hates it when I tell this story because — you guessed it — he is the boy from the crumpled photo. He insists he wasn’t all that interested in the other girl. Since I’m the one who ended up with the ring four years later, I suppose I should believe him.)

Whether or not a person is stalked (ahem … pursued? pitied?) in a college lecture hall at the beckoning of his parents, meeting new people is awkward business. 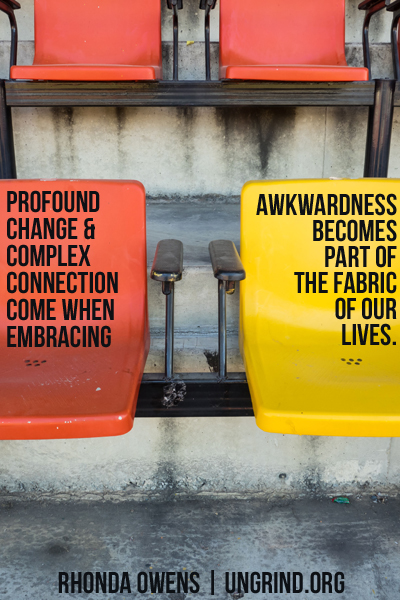 And if you want to move past the small talk stuff to get at the heart of a person, especially a person you just met, then awkwardness is nearly inevitable.

In a culture where most of us keep our noses buried in smart phone screens, we’ve exponentially expanded our pool of acquaintances while inadvertently diminishing the sense of really being seen or known.

Sure, we avoid inconvenient connections, uncomfortable conversations, and thorny topics, but by dodging all things awkward, we choose a relationally impoverished existence, surrounded by many but still feeling so alone.

May I suggest that we need to relearn the lost art of embracing awkwardness?

As with most lessons, we can look to the life of Jesus for the ideal illustration.

If anyone wholeheartedly embraced awkward interactions, it was Him. Here are just a few of the many ungainly social moments Jesus comfortably embraced:

Jesus vouches for an adulterous woman publicly accused (by the same Pharisees who wish to kill Him!), and in the process He humiliates the prideful men who, by walking away, silently admit that they, too, are sinful (John 8: 1-11).

Jesus astonishes His followers by washing their dusty, dirty feet with His own hands like a servant (John 13:1-12).

While at a Pharisee’s house, Jesus allows a woman notorious for her sinful behavior to wash His feet with her hair and anoint them with expensive perfume, AND THEN He tells the woman her sins are forgiven (Luke 7:36-50).

Jesus draws attention to and heals a ceremonially unclean, hemorrhaging woman who touches His cloak as He is walking through a crowd (Luke 8:43-48).

Jesus publicly invites Himself to dinner with a well-known albeit deeply despised little tax collector (Luke 19:1-10).

Each of these circumstances HAD to be awkward, even for Biblical times. Washing a person’s feet with your HAIR? Defending a guilty woman who, by law, should have been STONED IMMEDIATELY? Inviting yourself in front of the WHOLE TOWN to a terribly UNLIKEABLE person’s house??

Profound change and complex connection materializes when, like Jesus, embracing the awkwardness becomes part of the fabric of our lives.

Is there a difficult discussion to have? An inconvenient stop to make? An objectionable behavior to confront? An undesirable person to befriend? An accepted injustice to denounce? an unpopular decision to execute?

Then do yourself a favor: expect, embrace, and accept the unavoidable awkwardness sure to follow. Because chances are that a breakthrough of some magnitude is coming soon.

What I Dream for My Kids

The Lost Art of Embracing Awkwardness 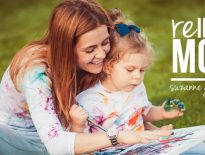 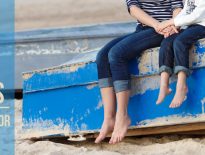 Articles What I Dream for My Kids