It was Day 6 of parenting five kids solo and for some reason I decided it was a great idea to schedule coffee with a woman who was new to the church. Her family had just moved here and I knew how that was — to be thousands of miles from familiarity. I am good friends with that feeling of alone that sets in when you sit too long.

It was Tuesday — the one day the kids go to classes away from home — and as cries rose from the kitchen reminding me I hadn’t grocery shopped and there was nothing to pack for lunch. The smallest had cries of her own, arms raised, reminding me her world was important, too, and I better never forget it.

I spun circles in the dining room, looking out into the living room and the kitchen, and tried to imagine what this woman would think of my home when she walked inside. It was real. It was a mess. And I, personally, was fine with that, but I also wanted her to know she was worthy of being prepared for. I wanted her to know I was blessed to have her in my home and I wanted to show that through having a clean place to sit and a candle lit and yummy smells through the home.

And stress rose up in me and poured from my mouth. “Why can’t you kids help out? Clean up after yourselves! Get your shoes on! Get in the van! Put your laundry away!”

Four pairs of eyes looked back at me — round, confused what to do first and afraid not to do anything, so they ran out the front door with backpacks bouncing and hopped in the car.

I answered the baby’s cry, scooped her up, buried my temper and told my oldest I’d be back in fifteen. Exactly five minutes before my company arrived for coffee and remnants of pumpkin bread.

Fifteen minutes later, I walk inside the front door to a pristine front living room. I look at the dining room table — scattered with crumbs and books just minutes ago — and saw it clean; the vases aligned and the chairs straightened. Large boxes of everything which had sat in the foyer for days waiting for me to go through them were now nowhere to be found. The stack of mail on the breakfast bar was gone, and the sink was empty with the dishwasher running. I looked up and saw my often-moody, are-you-listening-to-me-and-do-you-even-care teenager running around the main floor gifting me with a gift immeasurable. 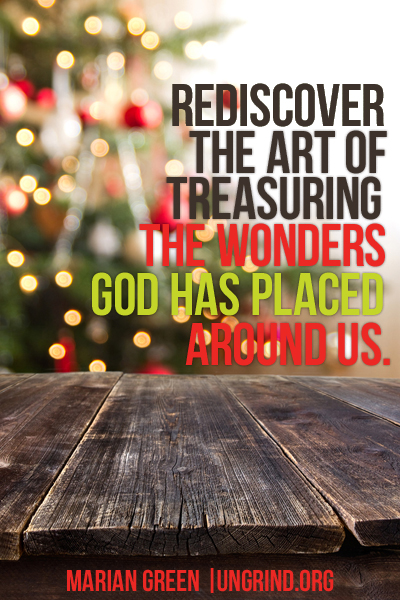 This boy-turning-man cares. He cares about the peace of his mama. He cares to help me in my moment of being overwhelmed. He cares enough to be moved to action. And my love for him swelled in that moment as I watched him vacuum–my firstborn, the first infant who graced my arms, the first child who toddled my heart toward the depths of a mother’s love.

And I wanted to share this moment — this pride — with someone, anyone.

Since my husband wasn’t around to witness this teenager wonder, my thoughts were constructing the status update I’d put on Facebook when the Spirit of God stilled my heart and whispered: Mary treasured all these things and pondered them in her heart.

Alone, with God, she marveled at the wondrous child before her and all the things being said about her firstborn, Jesus.

I realized I had lost the intimate art of treasuring these things in my heart. I was so busy sharing — everything — with everyone, that I had no idea how to quietly treasure the gift God had given me in the people around me. Those right before my eyes. Those I can reach out and touch.

Another word for treasure in Luke 2.19 is kept.

Mary kept all these things…(KJV).

Because they were gifts to her from God. They were the personal sustenance and reward He gave her following the season of loneliness she felt as a pregnant virgin. They were to be markers of all that God had promised and all the wonders surrounding Jesus’ birth in times she most needed to be reminded. When rumors flew and accusations spread from town to town regarding her grown child, when tempers flared and called for his death, when blood flowed and she gazed up upon the most miraculous gift a son can give his mother, when son became Savior and mother knelt before Son in childlike wonder.

It was in those moments her treasured memories kept her.

And so instead of running to my ipad or my computer, I watched this man-child work with the intention of pleasing his mom and my heart was drowned in love for him.

This season, rediscover the art of treasuring, of giving silent thanks to God for the wonders He has placed around us in such a proximity that their lives kiss ours.

Lord, teach us to treasure and to keep just a few of those most precious moments.

The Voices We Hear

The Lost Art of Treasuring

Articles The Voices We Hear 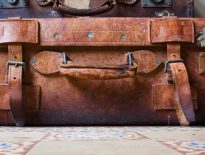