It was the morning after Valentine’s Day. I lay in bed and realized that some single women were waking up with the lingering hangover of disappointment, crumpled tissues littering the floor next to the bed and swollen eye bags greeting them in the bathroom mirror.

But it wasn’t only single ladies who woke up to a clouded dawn of disappointment. A handful of wives threw away all hopes of a romantic evening with the middle-of-the-night dirty diaper.

Last year was my tenth married Valentine’s Day. Per my request, I opted to spend it at home with a few single girls from church. My husband was laboring late into the night, and would only get home after the kids were tucked into bed.

As the girls and I sat around the table laughing and playing games, my attention kept shifting to my watch, as the minutes ticked later and later into the darkness. Eventually I picked up the phone to call my husband, as I expected him to be home a lot sooner from work. Much to my surprise, he was at the store, looking for the toilet paper I had asked him to buy.

Husbands who love their wives like Christ loves the Church might take their brides out for a candlelight dinner. But they might show the extent of their love by scouring the aisles of the grocery store for the right brand of toilet paper after working late on a Friday night in the middle of a freezing cold winter.

The world will tell us that love looks like chocolate and roses. Ann Voskamp eloquently reminds us that sometimes love looks like a sagging mattress that meets in the middle. Lisa-Jo Baker would be quick to say that love doesn’t always run through the airport.

God says that husbands ought to love their wives as Christ loved the Church. Christ didn’t show His love for His bride with chocolate and scattered rose petals. He demonstrated His love through the ultimate sacrifice — Himself.

Men who love Christ and seek to imitate Him will go beyond champagne and candles. They will show their love by imitating their Master, who laid down His life for His bride. And sometimes that looks a lot like buying toilet paper.

This post originally appeared at katemotaung.com on February 15th, 2014. For more marriage encouragement and specific ways you can pray for your relationship, visit Marriage Prayers.

3 Ways to Love This Valentine’s Day

You & Me Plus a Table Make Three: A DIY Love Story 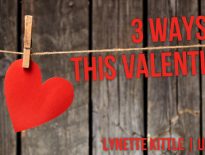 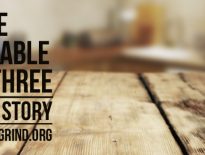 Articles You & Me Plus a Table Make Three: A DIY Love …