In hindsight, a Music History degree was not the most practical choice. Even though I am a singer, I hardly get to put my education to good use. And yet, when my three-year-old son was diagnosed with autism, my college major meant the difference between staying indoors or being able to leave the house.

I can usually forecast Salem’s day mere seconds into his waking moments. Call it a mother’s intuition, but I can look into his eyes and somehow know if the daytime hours and activities ahead hold sunny skies or volcanic eruptions.

One morning in early August the ash cloud was looming, and I begged God for the grace just to make it through the day. We had not even finished breakfast before Salem melted down and began furiously flapping his hands in front of his eyes. I directed him to a quiet space hoping that some solitude might cool him off.

From the next room, I could hear the faint audio recording of an autism therapy app on the iPad. It is a problem-solving app that features a chart picturing four objects (three are in sequence and one does not belong). For instance, visualize a quad diagram of a rooster, a frog, a camel, and a leaf. Clearly, the plant life does not belong, but to a static little thinker, this is quite the mind-bender. An enthusiastic female voice then asks, “Which one does not belong?” Once he taps on the odd image, he is baptized into a flood of affirmative responses by the automated inquisitor: “Awesome” … “Great Job” … “You’re Super.”

One of the images that did not belong this time was a purple music note — Salem’s current visual obsession. No offense to app writers, but don’t they know that ASD children have manic visual obsessions upon which they fixate so hard and so long that the momentary absence of such sends them into a downward spiral of hyperventilation? When the object of Salem’s unparalleled affection (the purple music note) was there one moment and gone the next unable to be retrieved by Mommy’s frantic touch screen tapping, it was as if a Mac Genius himself was cutting off his blessed air supply. 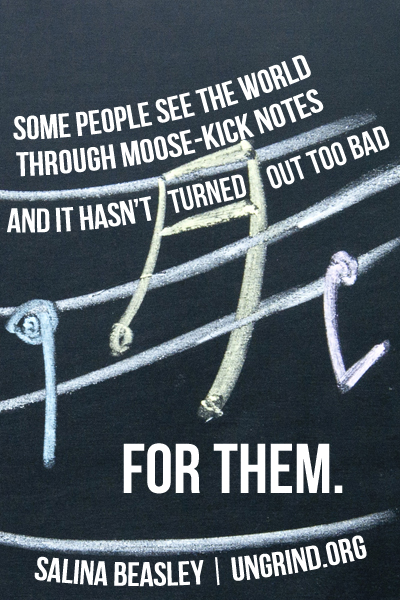 And so it began — the inconsolable string of tears and incomprehensible syllables.

Before Salem or I even knew what was happening, I scooped him up fully clothed and stood with him in the shower. All I could make out in his screaming was, “Want the moose-kick note … Want the moose-kick note” (music note). I thought about drawing one on the steamed glass of the shower door, but that would inevitably fade resulting in a swell of fresh tears and tortured gibberish. So, underneath the hottest water we could stand, I held him while he screamed and I cried and cursed iPads and app writers and autism and “moose-kick” notes. After about 45 minutes in the steamy shower, we were drenched and lightheaded.

Still, he could not forget his first love. As I dressed him in dry Buzz Lightyear underpants, he asked to see the music note.

I rummaged around for some scrap paper and a dull pencil. Even though my best visual art attempts are a tragedy, I did go to college where I spent the better part of four years drawing music notes. I managed to reproduce the one he so desperately wanted to see. It didn’t light up when he touched it. It didn’t resound with any recorded praise or affirmation when he identified it. It wasn’t even purple. It was a wrinkled up, chicken-scratched, erasable pairing of two 16th notes, and yet that was the moment my bachelor’s degree paid off. He shook all over with excitement.

Thirty minutes later I had dried my hair and dressed for church when I found him still shaking and holding the penciled drawing repeating the phrase, “Look Mommy! It’s a ‘moose-kick’ note” over and over and over again. Salem rarely expresses himself verbally, but as I bent over to Velcro his shoes he looked at me and said, “Mommy, ‘moose-kick’ notes make me happy.”

Grace for the Humble Who Fight Side by Side 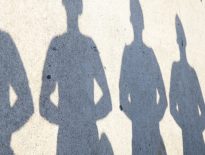 Articles Grace for the Humble Who Fight Side by Side 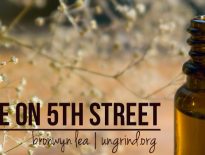