The story in Luke 8:40-48 took on a whole new meaning for me recently. It’s amazing how verses that have been read countless times come alive when we take a moment to place ourselves in the story.

This section of Luke tells the story of the woman who had been hemorrhaging for twelve years. As Jesus walked through the crowds, and people were pressing against Him on all sides, the desperate woman reached out and touched the edge of Jesus’s garment (verse 44). Some translations read “tassels of his garment.”

A noted Bible teacher shared that in Jesus’s day, Jewish teachers wore shawls with tassels at all four corners to “remember all the commandments of God, and perform them” (Numbers 15:38-39). Likely Jesus was wearing this type of shawl, and as He walked through the tight crowd, His tassels were easily accessible.

The woman, who had spent all the money she had on doctors who could not heal her (Mark 5:26), grasped one of the tassels from behind. She believed that if only she could touch His garment, she would be healed (Luke 8:28).

At once Jesus realized the power had gone out from Him. He turned around in the crowd and asked, “Who touched my clothes?” (Mark 5:30)

The disciples answered Him with the obvious: there were people pressing all around them. It would be nearly impossible not to touch Him. In fact, Luke 8:42 says that the crowds “almost crushed him.”

But Luke 8:46-48 paints a beautiful picture of what happened next. Jesus said He knew the power had gone out from Him. Even though so many were pulling at Him and touching Him, He sensed the faith of the woman who had grasped at His tassel.

Then the woman, seeing that she could not go unnoticed, came trembling and fell at his feet. In the presence of all the people, she told why she had touched him and how she had been instantly healed. Then he said to her, “Daughter, your faith has healed you. Go in peace.” 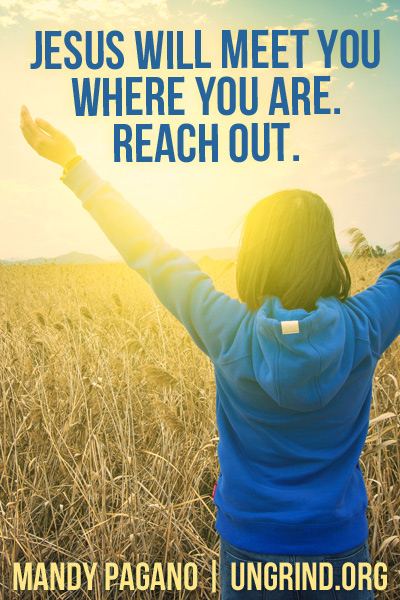 Have you ever felt this way? Have you ever felt desperate and hopeless? Have you tried everything you can think of, followed all the advice, said all the right things, and still can’t find peace or healing? That’s how this woman felt. She was emotionally, physically, and financially depleted.

Are you there now? Are you at the end of your rope and grasping blindly for anything to offer you healing and peace?

One of the things I absolutely love about this selection is that Jesus was hemmed in on all sides. There were countless hands on Him and yet He noticed her touch. Even more mind-boggling is, she didn’t even touch His person and He still noticed! She didn’t get lost in the literal crowd just like we don’t get lost in the figurative crowd.

Jesus turned and saw her.

He will turn and see you also. Like in this case where it was almost harder not to touch Him, Jesus is so accessible to us that we need not go anywhere. He will meet us where we are and notice us when we reach out to Him.

Take the first step: reach out.

James 4:8a says, “Come near to God and He will come near to you.” Let’s stop pursuing all the things we think will heal us, make us whole, and give us peace. Instead, let’s pursue the One we know will.

Mandy is wife to Joe and mom to 6 children ages 2 to 9 years. She has a bachelor’s degree in psychology and was pursuing a master's in elementary education when baby number 6 threw a monkey wrench in her carefully laid-out plans. So instead of teaching a classroom of children, God pressed on her heart to homeschool her oldest three, act as the coordinator for her local MOPS, and blog her heart out at Suburban Stereotype, Deliberate Women, and The Time-Warp Wife. Mandy feels compelled to live a life of faith in God with boldness and diligence and encourages other women to do the same. She and her family live in Pittsburgh, Pennsylvania, where they juggle soccer schedules, teach Sunday school at their church, and try to squeeze every moment out of the day. Find Mandy on Facebook and Twitter.

Reach for the One Who Offers Real Peace 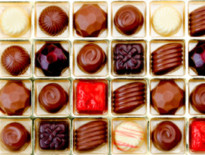 Articles 10 Ways Life is Like a Box of Chocolates 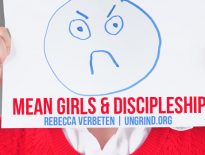