“Being a parent is hard!” My sister’s words tumbled forth in a Monday-afternoon email. She continued, “Of course I wouldn’t change anything, but I didn’t realize what I was giving up by having kids or how hard it would be.”

What prompted her lament was that, as a mom of two toddlers, she could no longer participate in the community theater scene the way she had since she was a girl. The leading lady parts she had once played were no longer really an option for her with two active little boys to care for.

As a mother of three young children myself, I understand her feelings. I, too, often feel like I “gave something up” when I made the decision to take on the role and responsibilities of motherhood.

There were the obvious things I said goodbye to — my job as a magazine editor and my place on the improv comedy team I had helped to found. But there were also the more subtle things — money for extras, regular haircuts, time with friends, free time and kudos for my accomplishments. And while, like my sister, I wouldn’t change a thing, sometimes I do feel like my identity had been altered beyond recognition.

I know I’m not alone in these feelings. Many moms I know experienced a big identity shift with having kids. Some, like me, left their jobs to stay home. Others continued to work but no longer have time for hobbies … or friends. The fact is, caring for children is all-consuming and unless you hire a full-time nanny, something has to go.

Still, most moms would say that their kids are worth it. The trade-off is a good one and they wouldn’t go back. So what is the reason for the deep sense of loss many women experience?

I can’t speak for everyone, but I think for Millennials (those born between 1980 and 1995, roughly) there’s one obvious culprit. My generation has grown up being told that self-empowerment (i.e., self-satisfaction) is the key to thriving in life. In other words, I will live well when I discover who I am and live in a way that’s true to myself. But what happens when “who I am” isn’t the changer of diapers and wiper of noses? I can begin to feel pretty down about my quality of life.

In the past five-and-a-half years, since I got married, I’ve experienced some serious identity whiplash. Here are some things that have helped lessen the shock.

When I was in college, I had a debilitating illness, and one of the symptoms was laryngitis. Up until that point in my life, I had identified myself as a singer. When I couldn’t sing any more (and some days could barely walk), my identity took a hit. Suddenly, at the tender age of 20, I was asking God who I was apart from some things that had formerly defined me.

Motherhood has been similar. One good thing about my mommy identity crisis is that it has exposed areas where I probably shouldn’t have been finding my worth in the first place. Sure, it felt good to receive kudos at work for a job well done (a sloppy, yogurt-covered smile just isn’t the same), but the truth is, I wasn’t any more valuable exercising my skills in the workplace than I am serving my children at home.

Each time my identity has been bruised, I’ve found it helpful to go back to the One who created me and ask Him to show me who He wants me to be in this season. Stubbornly clinging to what I “used to be” only leads to frustration and disappointment. The good news is, His yoke is easy and His burden is light, and He promises to be with me every step of the way. 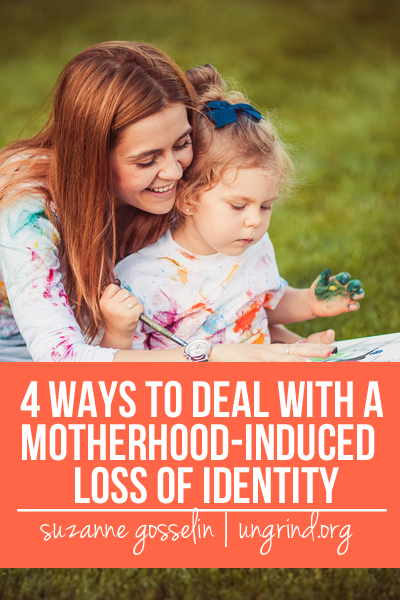 2. Accepting a Season of Sacrifice

My friend, Catherine, says before her first child was even born, she knew that motherhood would be her greatest season of sacrifice to date.

“In discipleship Jesus calls us to lay down our lives and to pick up our cross and follow Him,” she says. “As we take on the mindset of disciples, we are more ready to take on those sacrifices motherhood entails and to lay them down as offerings to Christ rather than the burdens this world may call them.”

We don’t live in a world that likes to sacrifice … anything. Instead comfort and indulgence is preached at every turn. If your happiness is based on these things, you will likely feel dissatisfied in parenthood. “There are trade-offs,” I told my sister. “Try to remember the amazing investment you’re making into growing your boys into fine men. It doesn’t get the same accolades as playing lead roles, but it really matters.”

Remembering that my sacrifice counts (and that Jesus invites me into His sufferings) can keep me going when I’m on weekend house-arrest with sick children (again) or changing the fifth poopy diaper of the day.

As my sister and I chatted about both having given up theater, she said, “Don’t you just wish our ‘thing’ was running?” Her point was that going out for a jog would be an easier activity to fit into mommy-life than playing the lead in a stage production.

My friend Chelsea, who once aspired to be an off-Broadway stage producer, found herself married with two young children instead. When she scaled back her work producing at a large church to stay home part time, she discovered something was missing. “I needed a creative outlet,” she says. “In those moments when the kids were napping, I needed something to do. I was working part-time, but my mind was still full-time.”

She began by gardening and growing herbs. The herbs led her to explore her culinary talents and soon she had earned a reputation as an excellent cook. Cooking opened doors for hospitality and building community. Of her transformation, Chelsea says, “You have to decide it’s OK to be someone different. Take a look at what you like to do and find something you can fit into your life.”

One piece of my identity that has suffered in motherhood is my social life. Six years ago, as a single woman, I had coffee or dinner with a friend almost every night. I thrived on these social interactions.

The season of motherhood doesn’t afford me as many relational opportunities — and I miss it. I’ve discovered that the path of least resistance is to just stay home rather than find a babysitter for date night with my husband or take time off to have coffee with a girlfriend. “Staying in” is my default mode.

In fact, as I was working on this article, I sent a Facebook message to Chelsea, asking her to tell me more of her story. I was almost startled when she suggested meeting in person to talk about it. Over cups of frozen yogurt we talked about the good the bad and the ugly of motherhood. It reminded me of how often I subsist off of digital communication instead of taking initiative to create the community and fellowship I long for.

Motherhood is a season where many women feel as if they are losing something, but with a little perspective, creativity and effort, it’s possible to find something more valuable than what you lose. As Jesus said in Matthew 16:25: “If you try to hang on to your life, you will lose it. But if you give up your life for my sake, you will save it.” As I look to Him to reinvent me, I will become the best version of myself.

The Lost Art of Embracing Awkwardness 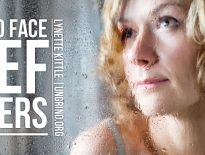 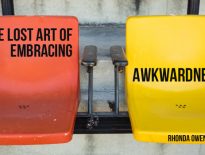