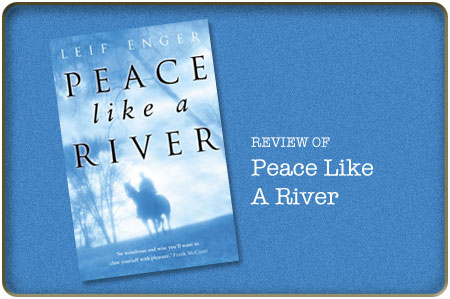 With tears streaming down my face, I closed the pages of Leif Enger’s novel Peace Like A River. The story is irresistible. It’s happy, sad, inspiring, funny, heart-breaking, healing, and poignant. It’s unbelievably believable.

When I dove into the first pages of this book I was taken in and never looked back. I was hooked. I couldn’t wait to read what happened next and got goose bumps numerous times.

As his debut novel, Leif Enger’s Peace like a River sings as beautiful as the hymn the title bears. A former reporter and producer for Minnesota Public Radio, Enger has a wonderful way with words. He’s wise, witty, and has fabulous prose. He writes in great detail with vivid imagery, is quite lyrical, yet keeps the book an easy read.

The novel opens with the story of 11-year-old Reuben Land’s birth. Born with no air in his lungs, the doctor declares him dead. But Reuben’s father, Jeremiah, picks him up and commands him to breathe. His lungs fill. Reuben deals with asthma from then on, but as a firsthand witness he knows that life is a gift. He’s a boy who has faith in his father. He’s a boy who believes in miracles.

Set in the early 1960s, the novel is narrated by Reuben, who is one captivating narrator. He’s irresistible. He’s funny. He’s a determined young boy living in a tightly knit family (abandoned by its wife and mother) that’s about to be broken in unimaginable ways.

When Reuben’s older brother Davy commits a zealous crime, escapes jail, and becomes an outlaw, Reuben, his much-loved comical younger sister Swede, and Jeremiah leave their home in Minnesota to follow Davy’s trail. Through the northern United States they trod in their Airstream trailer. Before long, they have a persistent Federal Investigator, Mr. Andreeson, on their tail. He too is in search of Davy.

Along the way, they find friends and definitely find adventure, but little does the Land family know that Davy’s taken refuge with a complete and utter monster of a man. As the family travels and comes closer to Davy, events turn miraculous. As the story and its characters come together, Reuben, Swede, and Jeremiah discover how much they rely on their faith and what a miracle they’re soon going to need.

Faith and miracles generously spill out throughout the pages of this novel. Characters literally walk on air, a pot of soup replenishes itself, and bodies are healed. There’s a chapter with a vision of heaven so beautiful that I found myself longing for it. I could hardly read the words through my tear-filled eyes.

Throughout the story Reuben often interjects his thoughts on miracles:

Real miracles bother people. Lazarus obeying orders and climbing up out of the grave—now there’s a miracle, and you can bet it upset a lot of folks who were standing around at the time. When a person dies, the earth is generally unwilling to cough him back up. A miracle contradicts the will of earth. My sister Swede, who often sees the nub, offered this: People fear miracles because they fear being changed—though ignoring them will change you also.

As I read, I felt torn—just like Reuben—between justifying Davy’s actions and doing what is right. At one point Reuben writes, "But after talking with Dad, it was plain to me Davy had done a grievous wrong. Don’t misunderstand; I backed my brother all the way. Yet it had come to mean something whether he felt anything like repentance."

I also felt anger towards the "enemies" as Reuben did. Especially toward Mr. Andreeson, as Reuben described him, "the king of pukes." I couldn’t help but dislike him too. I became so emotionally involved, that I forgot that Mr. Andreeson was simply doing his job. As God works in Reuben’s heart, and he comes to a place of repentance and begins to pray for those he considers his enemies, I was convicted that I also need to love and pray for those I have ill feelings toward.

The story of the Land family is unforgettable. Filled with the adventures of an outlaw, fervent insights, and incredible surprises. Through the journey that unfolds within the pages of this book readers will find how amidst extreme sorrow, hardship, and unbearable tragedy the Land family comes together in love and faith.

Through the Lands’ adventure, I too learned more about love and what faith really is. That instead of following God’s plans and trusting in Him, I so often question Him. When the hard times have passed, I often look back and realize how God used all the things that happened to me so that I might have faith. That I might be sure of what I hope for, and certain of what I do not see (Hebrews 11:1).

email
Related Topics:Anne Swanson
Up Next

Mentor to the Rescue

One day, Anne Swanson approached Ashleigh Slater about starting a blog to encourage women. The result: the webzine Ungrind was born. In addition to regularly contributing to Ungrind, Anne's writing can also be found on Radiant. Originally from Illinois, Anne is passionate about the church, family, and relationships. She's had more jobs than she can remember, but her favorite (after being a mom) was at Starbucks where she developed her coffee addiction. In her free time she enjoys having a cup of coffee (or four), cooking, laughing, reading, decorating, having a good glass of red wine, and spending time with her family. Her husband Justin and she were married in July of 2002 and they currently live in Kentucky where she is at home with their five young boys. 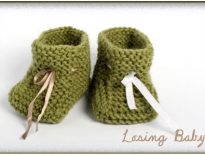 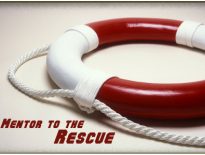 Articles Mentor to the Rescue