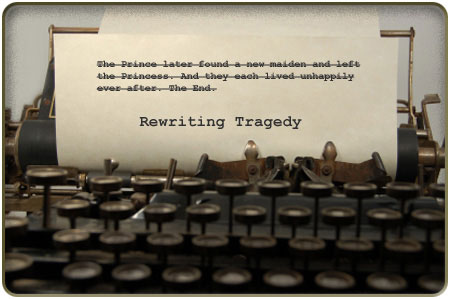 I hang up the phone after talking to my mom one Sunday evening and burst into tears. I choke out, “My dad’s having an affair!” Josh folds me into his arms.

He understands how I feel.

In the space of five years both of our parents have separated or divorced due to adultery. The ripping up of a marriage is a tragedy. It is devastating, particularly to the children—no matter how old—who still have to deal with both parents. Emotions of betrayal, anger, and bitterness all must be dealt with, perhaps for a lifetime.

Having had a front row seat to the disintegration of a marriage, I became skeptical that successful marriages even existed. For a time, I felt doomed to the same failure, with the thought creeping across my mind, “Will this happen to us?” But by God’s grace, it doesn’t have to be that way. As the Sara Groves song says, I can “re-write this tragedy.”

Instead of absorbing sinful patterns that may cause me to repeat the mistakes of others, I can make my marriage stronger by learning from those failures. In their book, Love That Lasts, Gary and Betsy Ricucci remind me of the hope that “the gospel redeems the past, provides for the present, and prepares for the future.” Even if my past has been riddled with mistakes—committed by others or myself—there’s still hope for the future of my marriage.

Some steps that have helped protect my marriage from the temptation of adultery have been: accountability, sharing interests, and pursuing romance.

Sin doesn’t flourish as well when others know about it. It’s hidden sin that grows like weeds. So, whether it’s something formal like a small group at my church, or meeting my friend Robin at Panera Bread, I need accountability. I need relationships with those who will spur me on to live a holy life.

I also need humility to share the truth about myself. I’m not saying every time I do something “wrong” I run and share it, I’m talking about long-standing patterns of sin. It doesn’t matter if I struggle with unforgiveness or pornography, I need to expose those areas of my life to gain the prayers and support of other wise Christians. James 5:16 reminds me to “confess your sins to one another and pray for one another, that you may be healed. The prayer of a righteous person has great power as it is working.” This includes sharing these areas of struggle with Josh as well. When I humbly share my weaknesses and accept input from others, I gain an unexpected source of strength and protection. By not keeping my sin a secret any longer, I discover I’m no longer alone in fighting against it.

Josh loves golf. To me, it was the most boring sport in the world. However, as I began to ask him questions while he watched a tournament one Sunday afternoon, he became excited to share his love of the sport with me. It meant so much to him that I’d shown an interest in it just because I love him.

I’ve realized that Josh and I need to be committed to pursuing similar interests or we could more easily grow apart. I’ve heard of many affairs starting when one spouse meets someone who shares an interest their husband or wife doesn’t. Now don’t get me wrong, I’m not saying every interest has to be a common one, but it helps to at least have a few activities to enjoy together!

Whether it’s kayaking, movie watching, or reading, sharing interests is a way to build a deeper friendship. We want to like being with each other best of all, not with our coworkers or friends who share our hobbies. By investing in Josh’s interests it shows that I really do care about him. Especially when I’m willing to sacrifice my time to spend it with him doing something he knows might not be my favorite activity. And who knows, maybe I’ll buy my own set of clubs eventually!

When Josh and I first were married we wrote each other a lot of love notes. I stuck them in with Josh’s lunch. He sent me on a scavenger hunt for my handmade Valentine. I’ve collected them over the years in a scrapbook. But I noticed that after being married for a while we didn’t write each other so many notes anymore. We were so busy discussing what to make for dinner or who was going to give the kids a bath that we forgot to express the things that really counted, like how much we love each other.

Since having children we’ve discovered how important it is to have weave romance in through out the day: a text message to say, “I love you” or flowers for no special reason. It could be so easy to just relate to each other as parents instead of husband and wife. That’s why we’ve also found it valuable to set certain nights aside as “date nights.”

Instead on collapsing on the couch and flicking on the T.V. it could be as simple as just talking or playing a favorite board game after the kids have gone to bed. Or it could involve getting a babysitter and going out to dinner, hiking, or dancing. The point is to be together without the kids so we can continue building our relationship as husband and wife. To develop the bond of friendship and remember why we wanted to spend our lives together in the first place.

Seeking accountability, sharing interests, and pursuing romance doesn’t guarantee that my marriage will be problem free. Only God can ultimately sustain a marriage. However, by actively taking these practical steps to grow closer together, Josh and I can—by God’s grace—make every effort to protect our marriage from being vulnerable to adultery. I don’t have to live in fear of making the same mistakes in my marriage as those in my family have. God can re-write this tragedy in my life. And that’s a beautiful thing. 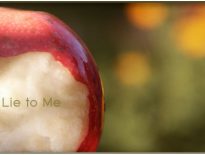 Articles Lie to Me 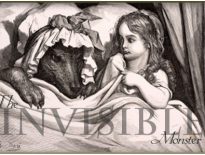