Somewhere early in my motherhood journey, I was introduced to the concept of “scripting.” I’m not sure I can think of another discipline tool that has been more helpful or important. From stubborn toddlers to second graders developing sass and attitude, I’ve spent countless hours telling my boys to “try again” and modeling the appropriate tone or words. From screaming and fit-throwing, to complaining and whining, to rude demands, I’m constantly saying, “Try again. You may not speak to Mama that way.”

But the tone of that correction and scripting varies dramatically — and I felt convicted about that when I read some insights from Tim Keller’s book King’s Cross.

Keller explores the “Request of James and John” in Mark 10, where Jesus has just finished describing to the disciples how He will be tortured and killed. After this grim and sobering prophecy, the first words out of his closest disciples’ mouths are startling: “‘Teacher, we want you to do for us whatever we ask.'”

“That’s a great way to start a prayer, don’t you think? ‘Oh Lord, I have a humble request, and I want you to do exactly what I say.’ Jesus puts up with them graciously — that’s the way he was. ‘What do you want me to do?’ he asks. He doesn’t say, ‘Um, would you care to start over?’ Or ‘How dare you talk to me like that? Don’t you know who I am? Don’t you know who you are?’ He simply says, ‘What do you want?'”

I can (should — must!) correct and teach my children without getting personally offended and outraged. The difference between Jesus and James/John was infinitely greater than the difference between me and my kids! The truth is, sometimes they are simply imitating what they have seen in me. In the midst of talking with my eight-year-old recently about the escalating level of sass I was seeing in him, I was pierced by the realization that the huffy sighs and eye rolls and “I can’t BELIEVE I have to deal with this” attitude had been modeled to him. By his mother.

While my sons are instructed to obey and honor me as their mother, I am more like them than not. We stand as peers before the holy God. And I am not inherently worthy of respect and honor in the way that Jesus is. So if He can respond gently and patiently to James and John’s (and my own!) ridiculous arrogance and petulant demands, how much more do I need to display that same gentle patience as I interact with my five-year-old or eight-year-old son (who IS a child, not just acting like one)?

Oh, how thankful I am for the way God is slow to anger, infinitely patient, abounding in love and compassion toward me. And oh, how I need His grace as a mother to enable me to reflect those qualities to my impressionable sons.

[A version of this article originally appeared at amykannel.com]

From Africa With Love

A Holiday Haiku in Question 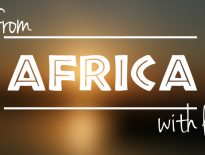 Articles From Africa With Love 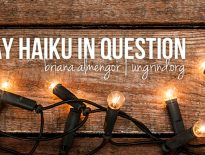 Articles A Holiday Haiku in Question