A clumsy smile left my lips as I stumbled off the bus. I hoped to assure the bus driver that his almost missing my stop followed by an abrupt halt was understood. Was his son fighting in Gaza? Was his daughter a part of the medical unit serving on the border? He zoomed right past the stop before mine forgetting it entirely.

My mind was awash with thoughts of how the “City of Peace” was anything but this summer when the air was penetrated with an eerie, earsplitting sound. The air raid sirens were sounding in Jerusalem.

We knew this was a possibility when we moved here last October and now reality sunk in. For a split second, I took in a sight recognizable to my Western thinking as something from a movie. But this was not Hollywood and there was neither musical score nor slow-motion movement. Real people, my neighbors began running. Drivers frantically sped up their cars to get home or stopped completely so that they and their passengers could get out, duck, and take cover. I was not going to get home in a minute and a half. I crouched down on the east side of the nearest block wall. A loud boom was heard overhead. The Iron Dome intercepted four rockets aimed at Jerusalem that evening at dusk.

There is about a second and a half to two seconds of a hush and a standstill after a rocket explodes. And in that still and silence, I realized something very profound which changed my life and thrust me into two months of in depth self-realization.

I was not afraid.

This from a girl who fell asleep at night replaying every Mexican ghost story I’d ever been told as a child.

This from a girl who spent a year going to the emergency room with anxiety attacks as a young woman.

Rockets flew and were intercepted above my neighborhood and I was not afraid.

I was quite proud of myself realizing I was not afraid during the siren because I had already surrendered my life to God.

And then He led me to another altar. This altar was different from the rest because while the others had the appearance of having been abandoned, this altar looked well maintained. As if it had been visited often.

I inquired of the Lord, “What has been laid on this pristine altar?”

He replied, “Your daughters.”

“Isn’t an altar made for a sacrifice?”

It was then that I realized where my greatest fears resided.

When each of my girls was a newborn we did the traditional Christian dedication. We stood immaculately dressed in front of our congregation, with verses chosen in prayer, and dedicated both Eden and Leia to God. But something detrimental happened not long after those prayers of dedication were said.

I took them back.

When Eden went to public school, I waited anxiety-ridden for 6 hours each day to get into the pick-up line so I could have my girl back.

When they began making friends I was fearful of the influences they were subjecting themselves to.

And now, as we move into a new phase of life laced with adolescent moods, new likes and dislikes, and a constant pull toward more independence, I have found myself riddled with a need for control, accompanied by my raging enemy – fear.

I am more desperate for the daily bread only God can give. I am committing morning by morning not to remove my girls from the altar of surrender.

I have become flesh to Proverbs 3:5-6, trusting in the Lord with all of my heart. Fighting momentarily not to lean on my own understanding. Acknowledging Him in every dealing with my girls. And I am finding that He is directing not only my path, but theirs as well.

I am relearning and ancient Truth: His ways and His thoughts toward Eden and Leia are higher than mine.

Wait For The Morning 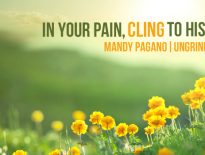 Articles Wait For The Morning 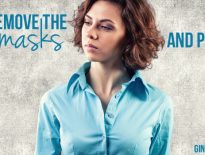