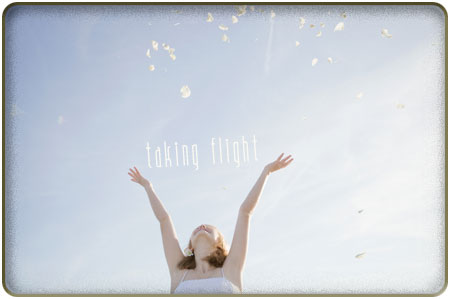 Oswald Chambers often wrote of “abandon” in his collected writings, My Utmost for His Highest. Since I began reading his writing as a teenager, I have loved the concept, the unrestrained giving over of myself to God. There was something so freeing about it; I’ve always half-believed if I did that, I might really be able to fly.

I have had my ups and downs with the idea, however.

I’ve been an unqualified fence-sitter for years, debating pros and cons until I have enough of an argument to justify my actions in one direction or another. I don’t want to have regrets, but I live too much in the middle.

I sometimes “surrendered” to God, sometimes held myself back from Him. I was too afraid to give myself over completely to Him. On the one hand, there was “Jesus paid it all;” on the other, there was “what will others think of me?” I knew I wasn’t yet beautiful enough or spiritual enough to be “abandoned.”

I was unable to receive His grace, because I felt I had to earn His approval. Being “right” was more important to me than being free.

When I got my first camera at 12 years old, I knew I wanted to be a photographer when I grew up. I took myself so seriously, composing and recomposing with my little plastic 35mm point-and-shoot.

My first college crush was a photographer. He had a grown-up SLR (single-lens reflex) camera. I wanted him to notice me, so I started taking photos again with my oh-so-snazzy new point-and-shoot. He didn’t notice me (I was such a dork!), but I was hooked anyway.

I transferred to a new school the next year with an SLR of my own, purchased over the summer. I puttered around with the camera, took pictures of the sky and of my friends and of campus life. I became friends with the college photographer. He gave me Photoshop tips, and loaned me some of his equipment on occasion.

Meanwhile, I jumped from major to major in school, finally settling on Journalism, sneaking the camera into my goals. I would be a photojournalist, I thought. That would justify my desire to take pictures.

When I dropped out of school to work full time so I’d have insurance to cover my healthcare costs, I kept taking pictures, but my dream was on the shelf. And I had so many other things going on in my life that I figured I should never really do anything with photography.

Then my coworker asked me to shoot her wedding. Not knowing any better, I took the wedding with very little research or experience. I bought a digital SLR for the event, so I wouldn’t have to worry about running out of film.

No one came running for more weddings — I look back at those photos and I know why! — but word did get around, and I shot several weddings the next summer. Still, I was constantly questioning myself, alternately loving and hating my pictures, driving myself to a standard of perfection I never met with little time to breach the learning curve and substandard equipment.

When I had my daughter, I shelved the dream yet again, planning only to finish the processing on the weddings I had shot before quitting photography entirely. I was a mom now. I wouldn’t be right for me to be a photographer. I shoveled out the last of the processing during my pregnancy with my son, expecting that would settle things.

But I kept taking pictures, unable to resist the light and the beauty around me. Earlier this year, things took a turn. I was asked if I would mind having one of my photos featured on a website, and I was drawn into a network of people who loved the around-the-house pictures that I posted at my blog.

I started to think I wanted to take pictures of people again. I missed the white dresses, the flowers, the romance of the weddings.

I told myself that it was unrealistic at best; at worst, it would mean neglecting my children. But I couldn’t say no — photography brought me alive.

My husband and I rewrote my functional contract for a solid one, and I began to work on my branding and think about advertising. Even as I worked, however, the question remained in the back of my mind: Should I really do this? I held my heart back, not wanting to commit to it without any justification but my love for the thing. I wasn’t even that good.

I almost quit a thousand times, and almost committed entirely another thousand — the same way I had committed noncommittally to God — but I simply could not abandon myself to the thing that made me come alive. I could not be right enough to do it.

About the time this year I began to seriously consider going professional with my photography, God began working in my heart about His love for me. This year has been my “year of the Gospel,” a year spent learning a little more about how Jesus’ death at the cross is actually “good news” worth living for.

Paul writes in Philippians 2 about the glory Christ left behind to become a man, encouraging his readers to “let this mind be in you that was also in Christ Jesus.” Jesus didn’t try to stay in control and grasp equality with the Father. He laid His whole life down for us, even though He knew how deep the death-wound would be.

This was the depth of His love for me, and I didn’t trust Him enough to let go of my own need to control.

Jesus said that no man can serve two masters. In a world where many do two or ten things at once for different jobs or bosses, that statement can get a little muddled. But I know it deep, trying to live with one foot planted firmly on the ground while wanting with all of my heart to step out in complete faith and live fully in Christ.

Practically, I’d rather keep myself safe than risk getting into trouble — or risk getting hurt or rejected. But deep down, I know my pragmatism is really pure cowardice.

There’s no room for God in middle-living. I spent all my time trying to be right, instead of enjoying the freedom He said Christ provides.

I would not have peace until I left my measured approach to God behind. He didn’t need me to justify myself to Him. Jesus had already done that (Romans 5:8-9). It was time for me accept His life-giving love, time to accept the real grace that He offered me, grace that meant I could be the woman He created me to be.

I stopped trying to be right, and I deliberately abandoned my life under the covering of the One who died in my place.

I was no longer required to justify my actions. I stepped down from the fence and began to pursue my passion — for God, and at the same time, for photography.

Abandon doesn’t look at all as I had expected, but it feels every bit as much like flying as I knew it could.

Spread the love
Related Topics:Kelly Sauer
Up Next

Singing I Surrender All

Running Down a Dream 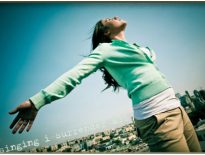 Articles Singing I Surrender All 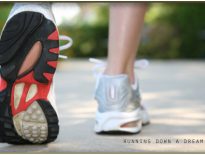 Articles Running Down a Dream