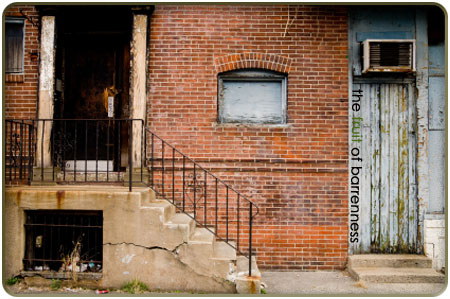 During the year in which my husband CJ and I tried unsuccessfully to conceive a child, I thought often about the word “barren.”

According to Webster’s Dictionary, barren means “incapable of producing offspring” and can also be described as “devoid” or “lacking.” It is not death exactly, but it is akin to death. Death describes a life that has ended; barrenness describes a life that, for whatever reason, cannot be.

Barren was one of the vocabulary words I taught my eighth graders when we read a short story called Thank You Ma’am by Langston Hughes. Hughes used the word to describe a city stoop, and in my head, I picture the word barrenness like I picture Hughes’ stoop — dark, shadowy, cracked, and dirty, absent of flowers, light, and beauty.

That’s how barrenness often felt to me too, in the year that CJ and I waited for a child. Each month, I would allow myself to hope, believing that maybe, just maybe, this time would be the time. And month after month, when I saw the tell-tale signs of an empty womb, I found myself bowled over by a deep and profound sadness, aware that I was, in spite of my deep desire to give life, still barren.

Motherhood is always how I have imagined spending the bulk of my adult life. Though I did well in high school and planned to attend college, I assumed I would grow up to be like my own mother, a stay-at-home mom to multiple children. In fact, even my dreams of marriage were primarily dreams of family. I did not imagine leisurely dinners with my husband after work or the freedom to stay out late and travel. I thought of babies, of little lives we would work together to care for and nurture, of partnership in creating and maintaining a family. And I assumed all of this would begin as it did for my mother, with marriage shortly after graduation from college and kids in short order.

This, however, was not what God had in mind. Not only did I not marry until my late twenties, I found myself approaching my thirtieth birthday with no sign of the child I longed for, even after months of careful charting and efforts to conceive.

At church, I watched the women with their small children, envying their full arms and busy, bustling pews. In my own row, it was just CJ and me. No diaper bags, no strollers, no children to fill our arms or our laps. Empty.

At small group, where I was the only woman who didn’t have kids, I tried my best to participate in conversations even when they veered, as conversations of young moms often (and understandably) do, to topics like cloth diapers and bedtime routines. I’d done enough babysitting to hold my own most of the time, but inside, I felt excluded. Alone.

In my times with God, I sobbed, wondering out loud why He would not answer my prayers, certain that He was holding out on me, perhaps punishing me in some way. Even though I believed intellectually that God was good, I simply could not see how He was being good to me. I remembered other times He had “failed” me, and I focused on the many ways my life had not been good.

One day, I bitterly told CJ how much I hated the word barren, reminding him of all its terrible connotations. He listened and then looked at me with a gentle and compassionate twinkle in his eye. “There is another word, Abby,” he said. “It’s a good word. It’s God.”

Paula Reinhart writes in her book, Better Than My Dreams, about the phrase, “But God…” She describes it as a phrase we must remember when our lives don’t turn out the way we think they should. In those moments, we see disappointment, failure, and the absence of God. But, she says, in every story, there is always a “But God….” God is always at work, even in what feels like His absence, bringing good to His children.

In my barrenness, I would come to discover, He was breathing new life into deep places in my soul, writing a story far different from the one I had planned, but a story that was good all the same. He was changing me.

The shifts in my soul did not happen, as I often wished they would, in one dramatic moment, like the sudden, relieving cool that follows a thunderstorm on a humid, summer day. Instead, they came like the first signs of spring in Northern Virginia where I live, thawing one day followed by icy winds the next, any sense of progress toward warmth and new life passing, for a long time, largely unnoticed.

But somehow, gradually, as the months passed, I began to soften inside, to see small glimpses of His presence in spite of the still unanswered prayers.

God showed up in the friends who walked with me during these months, the friends I called on the bad, desperate days when despair threatened to overwhelm me. They cried with me. They prayed with me. They watched while I balled up tissue after sodden tissue and listened while I processed emotion after endless emotion. They empathized where they could and were honest enough to admit when they couldn’t. They gently spoke truth to my soul.

God showed up in His word, in the stories of the man born blind (John 9) and of Lazarus (John 11); stories that point not only to God’s ability to heal what is broken, but also to His tender and redemptive purposes in physical pain and sickness. He reminded me that, like the blind man and like Lazarus, I am not the author of my own story, but a character in a greater story; a story that is messy and confusing and scary in the middle, but does have an ending where things will eventually resolve for my good and for His glory.

God showed up in my times with Him, speaking to my heart with a directness that I only rarely experience. He showed me clearly that at least part of the reason He was asking me to wait was because He wanted me to write and knew that if I didn’t prioritize that now, before kids, I certainly wouldn’t do so with all the demands of a family on my plate.

God showed up in my husband, who often did not understand the depth of my disappointment and who often bore the brunt of my frustration and despair, but who continued to patiently and faithfully love me.

I wish I could say that God showing up in all these ways gave me perfect joy and peace as I continued to wait on Him, but the reality is that it didn’t. My trust in Him still faltered, and there were many days where I failed to trace His goodness in any of my circumstances. And yet, it gradually became clear to me that my season of physical barrenness was bearing surprising fruit in some previously hardened places in my soul. For the first time, I was able to trust, however haltingly, that God was present in my suffering and that He really and truly remained good even in the midst of my pain. As a result, I was able to loosen my grip on my own story and, often through tears, entrust the next chapter, whatever it might bring, to the ultimate story writer.

In His amazing kindness and breathtaking generosity, He chose for that chapter to be a pregnancy, one that occurred after almost exactly a year of trying, just days before my thirtieth birthday. When our daughter was born this spring, CJ and I named her Elliana, which means “God has answered.” I wanted her name to remind me that God answered our prayers for a baby, but I also wanted to remember that He answered my desperate cries for help and changed me, making even my time of barrenness fruitful.

Spread the love
Related Topics:Abigail Waldron
Up Next

Abigail Waldron lives in the Northern Virginia suburbs of Washington, D.C., with her husband C.J. and their children. She enjoys teaching college writing courses and pursuing her own writing projects, including her blog, Redeeming Themes.

The Fruit of Barrenness 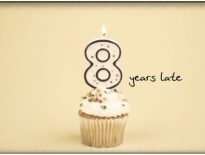 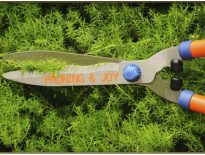