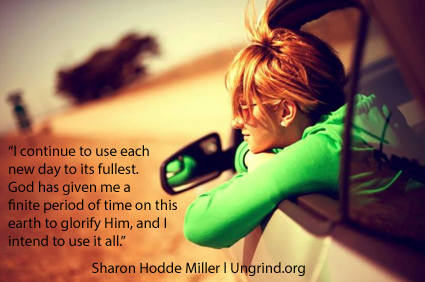 Soon after I graduated from seminary, I spent two years working as a college minister. I was still single at the time, and one of my favorite memories is a conversation I had with a freshman girl about her own single status.

We both sat in my office as she bemoaned the fact that she’d never had a boyfriend, and wondered aloud if she would ever get married. At the time, I was 28 and newly engaged. I decided to share with her the story of my own journey through singleness, the good times and the bad.

Sure, there were seasons of sadness and uncertainty, but throughout it all I had determined not to waste my singleness, and I’m glad I did.

My motto as a single woman was, “No regrets!” I wanted to do as much as I could for God and His church while I still had the luxury of freedom and time. I did not want to spend those years waiting for a husband whose arrival could be anywhere from a week to ten years away. I instead made the most of my single years by traveling around the world on mission trips, earning a Master’s degree, becoming a college minister, discipling many of the college women at my church, mentoring a local teen for eight years, and making amazing friends along the way. I had a lot to show for those years, and I didn’t regret a thing.

I shared this pep talk with my distressed student, hoping it might inspire her. “My single years were actually pretty great!” I concluded. “I wouldn’t change a thing.”

For a moment she processed my words silently, then she slowly stood up to leave for her next class. But just before she closed the door behind her, she wheeled around and exclaimed, “I just hope I don’t have to wait until I am 28. That would be HORRIBLE!”

Then she was gone.

That story makes me laugh every time I think about it. My grand tales of adventure as a single Christian woman had clearly fallen flat, but I suppose I shouldn’t have been surprised.

In spite of my many incredible experiences as a single woman, it is also a very difficult season of life. As each friend gets married off and one’s pool of single peers grows smaller, it can be genuinely terrifying.

I make that statement as one who not only struggled with singleness throughout my 20’s, but who has a number of friends still walking the path of singleness today.

In the past month, I have spoken with three different single friends, all in their late 20’s and 30’s, and wept as I listened to their stories. Each beautiful woman voiced a terrible fear that she is somehow unlovable, and that no man will ever turn his heart toward her. Each one of these women is undeniably exceptional, which is why I was so devastated by their pain. I felt helpless as they grappled with the fears that accompany their particular path.

Married Christians sometimes respond to the struggle of single Christians by speaking of singleness as a “gift.” However, it is often a gift that nobody wants, like a pink knitted teddy bear sweater from your Great Aunt Pearl.

I will not be so naïve or insensitive as to use that language here, but I would like to offer two encouragements to women who find themselves on the journey of singleness. I will also offer one encouragement to married women who love their single friends.

As I once shared with my young student, this phrase became the mantra of my single years. It is also a mindset that has remained with me ever since. I dedicated my single years to pursuing God with abandon.

I didn’t know what the future held, so I drained the marrow out of life in the mean time. Now when I look back on those years, I know I was a good steward of the unique resources I possessed.

This past year I attended two weddings in which both brides were in their late 20’s. During that same year, I had two friends marry in their mid-30’s, and another in her 40’s. I share these stories, not to strike fear in the hearts of women in their 20’s who want to get married now, but as a reminder that every woman’s path is different. No woman knows when or if she will get married, so it is easy to miss out on special appointments from God in the present when we are too busy looking toward the future.

In singleness, in marriage, and in every season of life, the unknown future can occupy much mental energy in the present. That is why Jesus warned Christians against this kind of worry in Matthew 6:34, instructing us to instead worry about today. I suspect he said this to protect us from ourselves!

I can become so caught up in waiting for the next big thing — a husband, a job, a house, a baby — but none of these good things ever extinguishes the longing for more.

This mentality instead produces a life defined by waiting, bitterness, and never fully living.

Now that my journey has shifted into marriage, God has continued to impress those lessons onto my heart. I continue to learn them each and every day. However God has also added to my instruction, now teaching me how to care for my single sisters.

Oftentimes, I feel rather inhibited in the comfort I can offer single women. I am no longer “in the trenches” in the way I used to be. Even so, it is crucial that I continue persevering with my single friends as they walk forward on their journey, and Exodus 17 always reminds me why.

In this chapter, Moses is charged with the task of holding his staff high in the air to insure the Israelites’ victory in battle. As long as Moses held his hands high, the Israelites would continue to win. After awhile, however, Moses became weary and could not raise his hands any longer. The Israelites’ future was suddenly in jeopardy, so Moses’ friends stepped in. Aaron and Hur brought a stone for Moses to sit upon, and then each man lifted Moses’ hands for him. With the help of these two friends, Moses held his staff in the air and the Israelites won the battle.

This story is a wonderful reminder to married women like me. Like Aaron and Hur, I cannot remove the burden my single sister bears, but I can certainly make it lighter. I can include her in my family and daily activities. I can pray for her and speak biblical truth into her heart. Rather than offer cliché advice, I can offer a listening ear. I can weep when she weeps and rejoice when she rejoices.

On a journey that is plagued by loneliness, I can remind her with my loving presence that she is not, in fact, alone.

As I have journeyed from singleness to marriage and onward, my goal has essentially remained the same. I continue to use each new day to its fullest. God has given me a finite period of time on this earth to glorify Him, and I intend to use it all. No matter the type of journey, my destination is to be found in Christ alone.

So, I press on toward the prize to which God has called me, and I will encourage my single sisters to do the same. What I won’t do is ask them to walk that journey alone.

[This article first appeared here at Ungrind on December 29, 2011. We’re republishing it because … well, we just love it that much. We hope you enjoy it too.]

In the Land of Blue Burqas: A Review

The Journey of Singleness 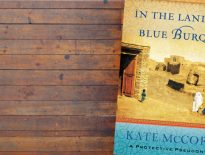 Articles In the Land of Blue Burqas: A Review 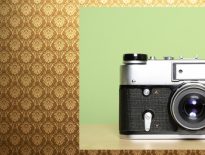