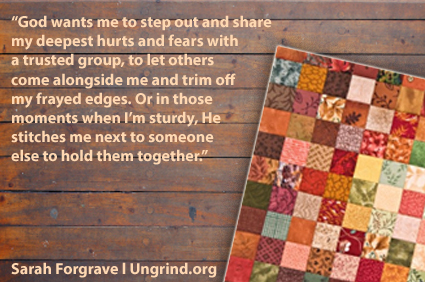 My mom used to make quilts when I was little. I suppose it’s a natural part of living in Amish country. She would bundle me up, and we’d go to the fabric store, where she would pore over bolts of cloth until she found just the right mix. Solids, patterns, florals — they all played a key role.

She would return home and set to work cutting out scraps of cloth, then sewing them into squares. When all the squares were ready, she’d pull out the massive quilt frame that took up half our living room and piece all the squares together. Several weeks later, we’d have a new bedspread, a quilt with an intricate pattern made more unique by the placement of its individual squares.

I recently came across a different kind of quilt — a quilt made up of several different pieces of fabric, all equally beautiful and valuable in their contribution to the bigger picture.

I call it the patchwork of humanity.

It happened at the mom’s group at my church. I arrived for the first meeting of the year, signed in, and grabbed a name badge with my name preprinted on it. Fifteen minutes later, I learned that my name badge had a code. The badges were split into three colors, and my color represented which small group I would join for the year.

As we all dispersed into our separate groups, I glanced at the women around me and wondered what the year might hold. I hadn’t met many of them before, and I questioned what would happen if I didn’t mesh with the people around me.

The leader welcomed us and shared her excitement about the coming year. Then she explained her vision for the group. Specifically, she wanted us to become a support system for each other, going beyond prayer requests that spanned ailing grandparents and travel safety, and move toward a community that was open and honest about our struggles at home.

I sat there quietly listening as doubts assailed me. Surely openness and honesty couldn’t be forced. What if these people didn’t want to dive beyond the surface? What then?

In five short minutes, my doubts were squelched.

I started the introductions and shared about my family, my work, and my passion for writing. The next girl shared about her husband’s call to the ministry, but expressed uncertainty at the waiting game in which they found themselves. A couple more introductions later, things got more intense.

A woman I’d never met before opened up about the problems she faced at home — a major disagreement with her husband that had her surviving on three hours of sleep most days. Her emotions were raw, and as she poured out her heart, the group silenced. My throat grew thick as I thought about her struggle and put myself in her skin.

Then the next woman spoke. I don’t remember if she officially introduced herself or not. All I remember is that one of the first things she said was that she and her husband were going through a divorce. She had a young son at home and talked about her concerns for him. Her voice broke, and the thickness in my throat exploded to my eyes. I felt the sting of her pain, my heart stretching out of my chest, yearning to cradle that small child in my arms.

Fifteen years ago, my parents divorced.

I grabbed a tissue from my purse and offered it to her. In that brief moment when we both touched the same piece of paper, I realized that God had shattered my preconceptions. He had linked me to these women I’d never met in a powerful way, a way that went beyond human logic and bias.

On the drive home, one image kept dominating my thoughts.

A quilt. A comforter like my mom used to make, blending solids, patterns, and florals.

Some of the fabrics were colorful and vibrant, while others faded into the background or had frayed around the edges. The quilt maker took those frayed pieces and stitched them next to a sturdy piece. As each scrap of cloth connected with another, the weak ones became stronger, until squares stitched together to form a quilt. A quilt with no evidence of frayed edges. A quilt as beautiful as its most vibrant pattern.

The image took prominence in my brain, and I realized that this is what God has called me to. He wants me to step out and share my deepest hurts and fears with a trusted group, to let others come alongside me and trim off my frayed edges. Or in those moments when I’m sturdy, He stitches me next to someone else to hold them together.

I love how The Message paraphrases I Thessalonians 5:11:

So speak encouraging words to one another. Build up hope so you’ll all be together in this, no one left out, no one left behind.

As an introvert, it would be so easy for me to stay hidden away in the back of the linen closet, to tackle life alone, to assume that no one else wants to know about all my problems. But to follow through on that would mean missing out on the hope God designed for His church. He doesn’t want to see anyone left out or left behind.

When I step out of my box, I subject myself to potential pain, the prick of the quilter’s needle. Life is messy. Not everyone lives a rosy existence. And often the struggles of others remind me of my own struggles, just like the divorced mother’s pain that resurrected my own buried pain that day. The heaviness that used to haunt me landed on my shoulders all over again in that one moment.

But by simply being there, I allowed God to patch me together with other women whose lives were frayed just like mine. Some of us had to endure a lot more trimming than others, and some of us had smaller scraps to contribute. Whether solids or patterns, we all melded together in a beautiful work of art. And in that moment, I gained new hope because I joined God’s greater masterpiece.

The patchwork of humanity.

[This article first appeared here at Ungrind on January 6, 2011. We’re republishing it because … well, we just love it that much. We hope you enjoy it too.]

How to Lift Up the One You Love

The Patchwork of Humanity 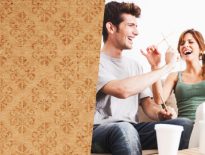 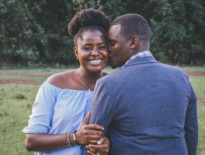 Articles How to Lift Up the One You Love