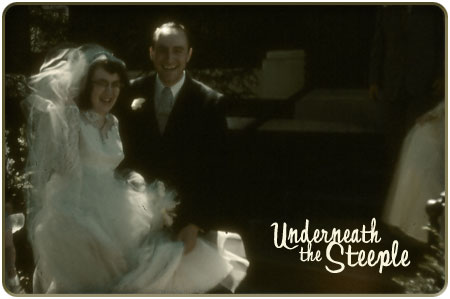 Esther Imler Schmidt, my maternal grandmother, always wanted to be a writer.

I never knew this about her.

Well, maybe I did. Truth is, as a child, teenager, and young adult, I may have been too self-involved to take notice of her life-long dream. It came as a surprise to me, then, when my mom shared this information with me after discovering my grandma’s memoirs titled, Underneath the Steeple.

Esther was born in Fort Wayne, Indiana. She attended Fort Wayne Bible College where she met my grandpa, Lysle Schmidt. They married in June 1953, and began their married life living above Amstutz’s Chicken Hatchery in Celina, Ohio. After graduating college, Lysle served as pastor in a number of churches and Esther served as a pastor’s wife, Sunday School teacher, piano player, nursery worker, and wherever else she was needed. In the early 1970’s she started the Women’s Prayer Breakfast in Celina, Ohio, which still continues today.

After living with Alzheimer’s for the past six years, Esther quietly went to be with Jesus this summer. In this life, as her memory deteriorated, she held on to one constant: she loved Jesus and He loved her. This truth never seemed to escape her. And when she finally passed from life to life in her sleep, this constant faith became sight as she met her Savior face-to-face.

Even though she never saw her dream realized while she walked this earth, it’s realized now as my mom and I publish this excerpt from her memoir. It’s a humorous look at her engagement and wedding to my grandpa — her husband of 52 years. 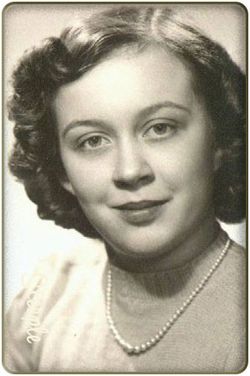 During my first year at college, I had the usual amount of boyfriend trouble — I couldn’t find one! No, seriously, I had a few … very few.

I met my future husband my second year at college. He was not in any of my classes, but I knew his name and where he was from, but nothing else. On Friday nights we always had a candlelight supper.

I was at one end of the table and he was at the other. Neither of us could see very well by candlelight, plus I’ m nearsighted. Within one month we were engaged, six months later we were married, and 10 and a half months later we had our first child.

At our college, permission had to be granted in order to marry and remain in school. My future husband went to the Dean of Men’s office, but do not believe he used the right approach. He said, “Esther and I want to get married in June; we are getting married with or without your permission.”

Needless to say, we didn’t get permission and my husband had to go to another college the next semester.

The last semester of my college life, I moved home with my parents in order to save money. My home was only a few miles away from school. My fiancé lived off campus in a furnished room. Even under these circumstances we were not supposed to be in a car together without permission.

So each Friday night we had a Missionary service. Afterward, I had no desire to wait on a dark street corner for a trolley so my fiancé took me home in his car. Our undercover transportation method consisted of: After the service, I walked out ahead of him to the car, which was parked across the street. He followed shortly. I sat way down in the front seat so I couldn’t be seen.

One night after traveling a few blocks from the college, we stopped for a red light. Thinking the coast was clear, I sat up and we talked while waiting for the light to change, I glanced over at the car beside us to see the president of the college!

We were married on June 21, 1953. I was late to my own wedding, after dressing at my grandmother’s apartment, which was near the church. Dear Grandma thought it was fashionable to be late to one’s wedding, so she set the clocks back.

The guests at church thought I had “chickened” out, as they sat sweltering in the 90 degree heat, and the poor soloist got tired of singing the same song over and over again as they waited.

Finally arriving at the church, I got down the aisle without incident and my dad didn’t even cry, although he was sure he would. And all went well until we knelt at the altar. The soloist was to sing “Savior Like A Shepherd Lead Us,” but his book opened instead to “Rescue the Perishing.”

After the ceremony, when my husband pulled my veil back to kiss me, my tiara started to fall off. I grabbed it with one hand and held it on desperately as we started to walk down the aisle but only managed a few steps as my sister (and Maid of Honor) was standing on my train!

As our guests passed through the receiving line they said, “It was a nice wedding anyway.”

It’s been 18 years since I was first published. I’m living my grandmother’s dream, just as my mom has. My footsteps follow in those of two women who have impacted my life deeply. And perhaps, one of my daughters will embrace writing in the years to come. In the end though, I hope that the legacy I continue to pass on through the generations isn’t one of writing, but is instead the one my grandma held tightly to: I love Jesus and He loves me. 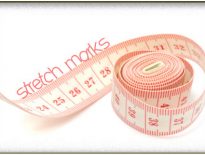