The streets of Jerusalem are electrifying in the middle of the day. I love the business, the honking of horns, the way everyone, even perfect strangers, interact like one, big family.

Something stirs in my core to hear the ancient, resurrected, biblical language, Hebrew spoken in everyday, non-religious, simply familial or industrial circumstances.

Kama ze ole? (How much does this cost)?

Lama at lo medaberet ivrit adain? (Why don’t you speak Hebrew yet)?

After 10 months of living here, I still get misty-eyed at the sight of tzit-tzit, tallit, and kipot on the religious men. Reminders of who they are and whose they are.

And I’ve become of the opinion that the Orthodox Jewish women wear the most elegant of women’s fashions. Their hair piled high and majestically, covered with feminine and funky colored fabrics, revealing such strength and dignity in their countenances.

I was never so aware of my five senses as I am living here in the City of the Great King. I get to see and touch and hear and taste the treasures of the Land sought after by historians, theologians, and artists for millennia. But there is one thing that brings my feet to a serene halt on the busiest of streets, causing me to close my eyes, inhale deeply, and hold my breath as long as my lungs can endure before I slowly exhale. The fragrances of Israel are conclusively unmatched anywhere else I’ve traveled to. The warm Jerusalem breeze causes the Middle Eastern spices to mix with the fragrances of the oils, fresh baked breads and pastries, and fresh produce and flowers promised by God to His People and His Land. Together they produce an exotic bouquet that delights me like nothing else I’ve ever experienced.

Smells have always aroused so much emotion in me. When I was a little girl one of my favorite fragrances in the entire world was the smell of tar and asphalt on my father’s work uniform. I loved that smell because it meant my father was home, the family was together, and we could settle into our evening routine.

For years after my daughters were no longer babies I brought Johnson & Johnson’s lavender bath baby wash and baby lotion as gifts to baby showers. The fragrance reminded me of the smells of my freshly washed, smooth skinned, all pajama’d up babies fresh from their sink bathing. I was enraptured nuzzling my nose over their bellies and their wild, dark hair. I wanted to make sure every new mommy I knew had the same experience with her babies.

To this day I smile and remember the campground showers of my adolescence when I gently squeeze a bottle of shampoo releasing a puff of air infused with a floral, buttery, fruity scent. That fragrance takes me back a couple decades and then I’m lost in the memory of bare feet, the desert heat, dark, tanned skin, and the Colorado River on the California/Arizona border.

And every Friday morning, with arms full after rushing around my neighborhood on foot to gather all the groceries my family will need for the weekend before all stores close for the Shabbat, I stop at the top of my apartment complex’s stairs before making the four-flight descent and breath in the tantalizing aroma of the chicken soup being prepared by the Jewish wives and mothers before they settle in to their day of rest.

What is it about the sense of smell that is so overwhelmingly powerful? While one smell can swiftly whisk you away to another time and place, another can cause your whole face wrinkle up in repulse or even cause your insides to twist and turn almost violently.

Over the last 10 months the Lord has brought me repeatedly back to the fact that He places great emphasis on the sense of smell; both the pleasant and the offensive.

On sixteen different occasions in the book of Leviticus, an “aroma” is mentioned as something pleasing to the Lord, specifically in reference to the sacrifices commanded by God.

In Isaiah chapter 1, the prophet is given a vision from the Lord. In it, the Lord conveys His feelings regarding the rebellion of His Beloved Israel against Him. He then speaks to the people of Judah and Jerusalem telling them that because their hearts are wicked, their sacrifices are displeasing to Him.

“Listen to the LORD, you leaders of Israel! Listen to the law of our God, people of Israel. You act just like the rulers and people of Sodom and Gomorrah. ‘I am sick of your sacrifices,’ says the LORD. ‘Don’t bring me any more burnt offerings! I don’t want the fat from your rams or other animals. I don’t want to see the blood from your offerings of bulls and rams and goats. Why do you keep parading through my courts with your worthless sacrifices? The incense you bring me is a stench in my nostrils!'”

God commanded these sacrifices of His people, but because of the atrocities of their rebellion, He now said they were a “stench in His nostrils!”

The concept of “fragrance” becomes much more personal to us Gentiles when we read through the teachings of the Apostle Paul. 2 Corinthians 2:15 tells us that we are the “sweet fragrance of Christ.”

On the night of June 15th, three Israeli boys were kidnapped on their way home from school. This event rocked the entire nation as we all felt that they were “our boys.” Just minutes after the news broke of their abduction, our neighbor, *Esther, an elderly Jewish woman from South Africa knocked on our door and with tears in her eyes asked, “Do I even need to ask you to pray for our boys to come home?”

Three weeks later the bodies of our boys were found and my thoughts immediately went to Esther. I knocked on her door and she came out with tears streaming down her face. I was at a loss for words until she reached for my hands and said, “Will you just hold my hands and pray like you did last time?”

I left her door that night keenly aware that there is a God-fragrance being carried from my home to hers.

Embrace Oneness in Your Marriage 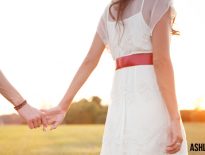 Articles Embrace Oneness in Your Marriage