Growing up, I imagined I would marry someone tall, dark and handsome. He did not need to own a horse, but I did hope he would have good hair. I imagined he would be a businessman, a doctor, or a teacher. My mom, on the other hand, always said I would likely marry an accountant or an engineer. As a kid, I didn’t have a clue what either of those professions entailed, but they sounded pretty boring to me. However, in that unexpectedly wonderful way of moms: she turned out to be right. I married an engineer. And he isn’t boring.

My husband is brilliant and fascinating and he has an unexpected, dry sense of humor that sometimes leaves me paralytic with laughter (ROFL, if you must know). But he is … well, how to put this? A nerdy kind of awesome.

I think my mom identified some strong geeky tendencies in me as a kid, and foresaw that I was more likely to meet my match in Algebra than in Art class. If CBS’s Big Bang Theory had been around at the time, she might have pointed knowingly in that direction.

She was absolutely right, as I was about to learn in the very first months of our relationship. We had only been married a few months when my new husband started a PhD in Engineering. After about a week of classwork, I asked him how his courses were going. “Good,” he said, “and we even get to do some of our work in R, which is my favorite programming language.”

Not only did he know a programming “language,” but it turns out he knew enough of them to have chosen a favorite?! The man I had married just 8 months earlier had a host of wonderful qualities, AND now it turned out he was multi-lingual in the way of computers?

Thus began the process of learning to love my geek. I loved him, yes — but I had much to learn about HOW to love him. Loving one another — belonging to each other — commits us to being students of our beloved. Love requires us to observe, to understand, to learn what makes the other tick. It means learning what kind of peanut butter they like, how they like their backs scratched, when they need to be alone, or when they need to hear a corny joke. It means, to use the popular phrase, learning their love language.

I knew I had struck gold when I came across a T-shirt at thinkgeek.com (it’s like Disneyland for nerds, trust me.) The T-shirt has this written on the front:

The first time I saw the shirt, I stared cross-eyed at it, trying to decipher its meaning. My husband, however, took one look at it and burst out laughing. When he finally recovered from his tears, he translated for me: #FF0000 is programming code for red. #0000FF is code for blue, and the final line was a play on a line from an early computer game that was so badly translated from the original Japanese that it became famously hilarious. In a crucial scene of the game, the aliens take over the space command center and issue this ominous proclamation: “All your base are belong to us.”

Lingerie stand aside. If ever there was an “I am YOURS” statement to make to a computer nerd, this shirt was it. I ordered it, and wear it from time to time. It makes my husband feel loved, and it also allows me to identify computer science majors at 50 paces when I walk around our college town’s campus. If a guy sees the shirt and busts up laughing, you can bet your bottom dollar he’s a computer geek too.

I love my geek, and I have the T-shirt to prove it. To paraphrase that wise old romantic, King Solomon:

This was adapted from a post which first appeared on Bronwyn’s blog.

When Love Looks Like ThinkGeek and The Big Bang Theory 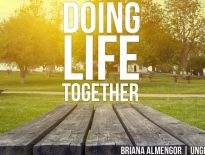